How do I make a character follow behind another?

I'm creating a game in C++ using OpenGL. I want to add a character into my game who, after meeting the main player, follows the player around. The follower should position themselves directly behind the player, moving when the player does to stay in the correct position: 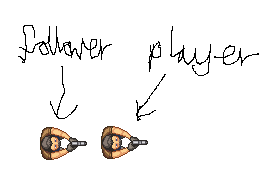 How can I accomplish this?

There are several options for this.

This will demonstrate how to create a dynamic list of positions the AI could move towards while following the player without mimicking the players movements or using a path-finding algorithm.

We'll maintain a list of a minimal amount of points needed to follow the player (we'll use it to find the shortest path towards her).

This is about it and you always need to move after that checkPointList's tail and remove the item in the tail once you get there. If you are too close, then have the AI look at the player and wait until it is far enough to require following.

Not the answer you're looking for? Browse other questions tagged c++ ai game-mechanics character or ask your own question.

21
How to build a “traffic AI”?
5
In MMO game, how to handle user characters, who are offline?
9
How would I move a character In an RPG with Bullet Physics/Ogre3D?
0
How to save a character to be used in all Game States?
7
How can I simulate a floating character in Box2D?
2
Game Maker: Studio - Make objects avoid other instances of same object with A* pathfinding
23
How to make AI detect a target behind a wall, who is only partially exposed?
0
How to implement jumping on the left and right?