Given a set of tiles on a grid, I want to determine:

The player will begin by pressing down on one tile, then dragging their finger to other tiles to create a chain of same-colored tiles. I will check as I go to see if the next tile is valid. Ex. If the player begins on a red tile, their only next valid move is to an adjacent red tile (diagonals do count). When the user lifts their finger, I need to be able to check for the 3 items above.

So my initial thought was that, since I was checking for the validity of the chain each time I went, when the player lifted their finger I could check if the first and last tiles were adjacent. (I already know they're the same color.) If they were adjacent I had a hunch that I'd made an enclosed figure, and I was going to come here to try and see if I was missing something big, and to get some kind of logical/mathematical proof that my hunch was correct (or an example proving it incorrect.)

But that's when I thought of item number 2: I also have to account for chains which use an edge of the board as a side of the enclosed figure. In that case, the first and last items in the chain would not be adjacent, but I would still have an enclosed figure. So now I'm back to square one, a bit.

What can I do with this chain of grid coordinates to figure out if they make an enclosed figure or not? And once I do know I have an enclosed figure, what's the best way to get an additional list of all tiles that fall inside its bounds?

Above I've drawn pictures of what I expect the 4 possible results of this test can be.

Case 4 is the trickiest, because you'd have to extract the "extra" chain links to find the enclosed figure and the pieces that fall inside it (but not around the "unenclosed" area).

So... Anyone have an idea of a good way to solve this, or just a starting point for me? I'm kind of going in circles at this point and could use another set of eyes.

1. Detecting a loop of tiles

The problem seems similiar to detecting a cycle (loop) in a graph, see here or here.

The screen border consists of those imaginary tiles which would form a one tile wide rim around the screen of visible tiles.

According to your specification part of the screen border would form an implicit part of a closed loop. Just to detect a closed loop, it would be sufficient to extend the graph G to a graph G'by honoring the connection via this rule:

3. The inner part of a looped area

I would go into a similiar direction to what user Arthur Wulf White suggested:

Limiting the set of tiles we have to examine by the bounding box of the loop tiles.

Then using a flood fill to select all tiles within the bounding box which are either exterior or interior to the closed loop. It can only be one of those two cases. Which one we have to find out afterwards.

Extending the bounding box by one tile in each direction would be a good idea as well, yielding the extbb, so we just end up with one connected set of exterior points, in case we started the flood fill with an exterior tile.

Once we have the flood fill area, we would calculate its bounding box as well, the ffbb. In case we started with an exterior tile, it should be identical to the extended loop bounding box.

In case we started with an interior tile, it should yield a distinctly smaller bounding box, because the loop tiles have to be sandwiched in between both bounding boxes.

The initial starting tile for the flood fill could be any tile within the extbb which is a free tile. Maybe picking one randomly is the best approach.

If I would know before that the interior is smaller than the exterior, I would start around the center of mass of the loop points which is in the interior for many areas (counter example: C shaped area), otherwise on the border of the extbb. But I have no idea how to estimate this.

Normaly I would say a simple walk starting from some tile and keeping a list of visited tiles would be sufficient to detect a cycle, but that screen boundary condition might yield a more complicated graph, so you should be on the safe side with a graph algorithm.

Below is an example where the interior is not connected, on the other hand the cycle detection should find two loops in that case, one should get discarded. 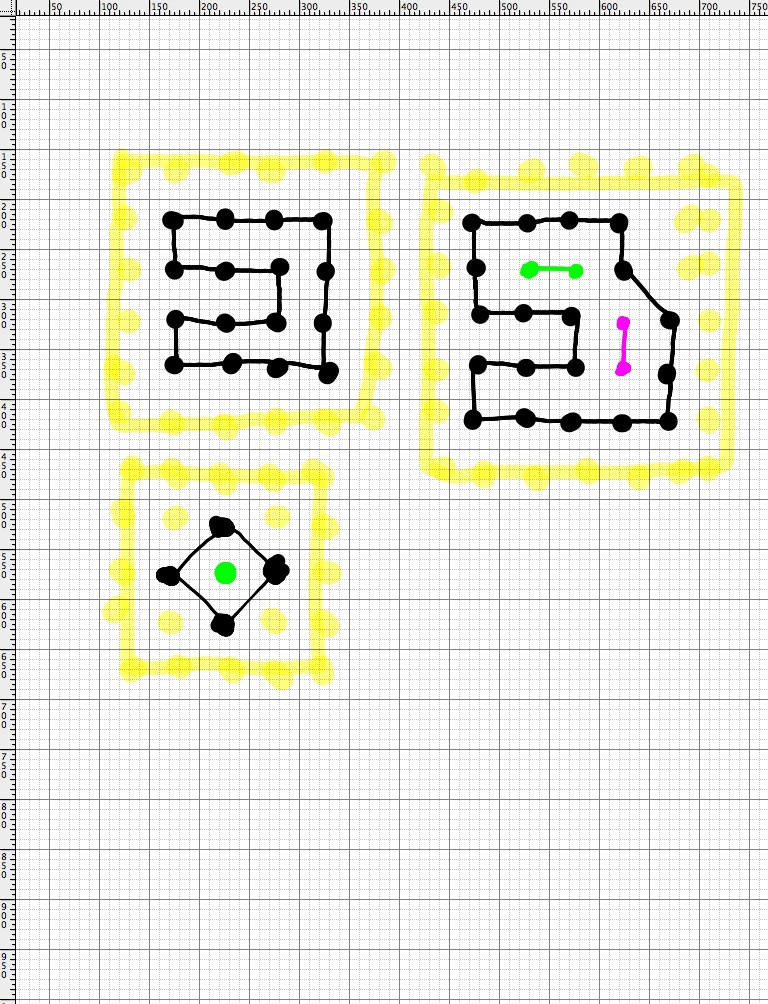 Your intuition is right, assuming that the chain ends as soon as the user tries to select a tile they have already selected. In that case, the shape in general looks like a lasso, in your picture (4). If they can keep swiping, then they can draw many loops, and things get more complicated. What you want to do is answer the points-in-polygon question.

First, we need to define the problem. I am going to assume that the situation looks like (2), i.e. any tail has been stripped off, and the end connects back to the start, so that each tile has exactly one "predecessor" and exactly one "successor" in the chain (where the predecessor of the successor of tile X is always tile X). Further, if you follow "successors" for long enough, you eventually get back to where you started. You can use Gurgadurgen's suggestion to detect whether the loop actually crosses back on itself at any point. Assuming you end the user's input when it does, it will look like some series of nodes in a line, followed by a loop. You can strip the line off the get the loop.

Now we, for each row do the following:

Now take all the tiles which are IN, add in the tiles on the border (including a tail if you stripped it earlier or not, your choice), and call that the region.

If you want to allow the user to use borders, remember that this does not define and IN/OUT on the board, but just divides it into two parts. You could select the smaller region, for example, or require the user to use two adjacent sides (i.e., the left and bottom, but not either top/bottom or left/right).

An optimization is that you only need to do rows which have any border in them (if you can't use the sides). I assume that your board is small enough that iterating over every tile and doing a very simple computation is not an issue, even on the weakest mobile system. (You do have to render them, after all, which is far more complex of a task).

You can resolve this by:

To do one, iterate over all tiles on the chain and find their minX, minY, maxX and maxY and that is your bounding box or AABB.

Iterating over the frame is simple, just make sure not to flood-fill outside the grid. You can learn how to flood-fill in Wikipedia.

For number four you can start by only checking tiles adjacent to the chain. You could flood-fill from any tile you find that is not marked to locate more tiles.

0
In a grid based system, where users can build their own walls to create buildings, how do you determine which parts are indoors?
1
Detect if a chain of tiles form an enclosed shape/contour
3
How can I detect enclosed areas in an arbitrary set of overlapping lines

7
Best algorithm for recursive adjacent tiles?
1
How to order points on a 3D grid such that we can connect them in a line loop correctly
2
How do I recognize squares, rectangles ... (like in TwoDots)?
0
Match 3 game - Check for matches
2
Determine if set of connected tiles can fit inside grid
2
Redundant checks from spatial partitioning
13
Efficient Algorithm for the boundary of a set of tiles
0
Updating connected states in a "build the pipeline" puzzle game