What dimensions should you use for a perspective projection frustum?

What dimensions should you use for a perspective projection frustum? Initially I created a perspective matrix based on the width and height of the screen, with a calculated zNear value based on a 45degree FOV.

But then I realised that this isn't a sensible idea and you shouldn't base your frustum on pixels, and you should use logical units instead (else when the window / screen changes size, objects will change position or size).

So now I'm wondering what dimensions I should use for the logical planes of the frustum? How do you choose a zNear value? Is it sensible to base it on the desired FOV? I'm aware that having a small zNear value can mess with the z-buffer, which is why I initially based it on the FOV.

My current thoughts are of using a logical near plane of TopLeft: -10000, -10000 and BottomRight: 10000, 10000. But then that generates a zNear value of ~24142 based on 45degrees FOV, which seems awfully high. What advice do you have? What dimensions should you use for a projection frustum?

zNear and zFar are measured in world space, not in anything to do with pixels. Their scale will depend on the scale of the scene you're rendering and how close/far the camera will be to the geometry. For instance, if your scene is modeled in meters, you might set zNear to 0.1 and zFar to 1000 or so. This would let you get the camera as close as 10 cm from the geometry before it starts clipping, and let you see distances of up to 1 km. You can adjust these values if you have a smaller or larger scene or if you use different units.

For most cases, it's simpler to use gluPerspective instead of glFrustum. That lets you work in terms of the FOV and aspect ratio, which is more convenient than the width/height of the image on the near plane. If you compare the formulas listed in the docs for gluPerspective and glFrustum you can see how these functions correspond to each other. They do the same thing, except that gluPerspective has more convenient parameters, and doesn't handle off-center frusta (which are uncommon anyway).

zNear is not really related to field of view. FOV specifies the angle of the frustrum, while zNear describes the distance to the nearest clipping plane. As an example, here are two frustrums with the same FOV, but different near clipping planes. 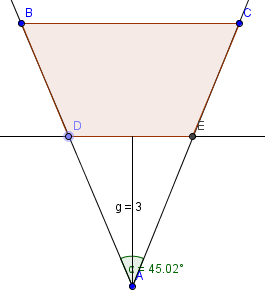 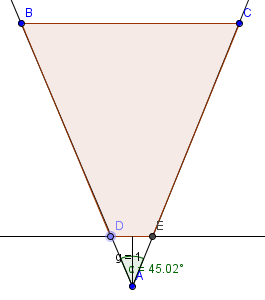 And here is another frustrum with the same zNear as the first, but different FOV. 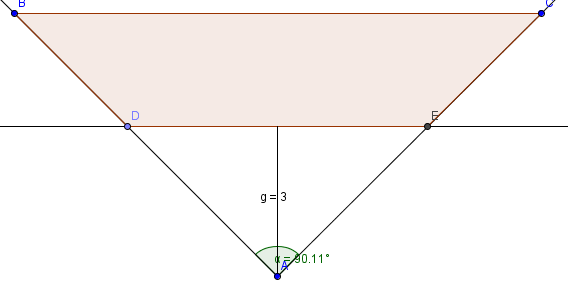 A good approach to clipping planes is simply to put the zNear as far away as possible and the zFar as near as possible, while still encompassing your world. Putting zNear closer to the camera than any world object will ever sit is a waste of Z-buffer values that will never be used. If your world isn't very large, you don't need to worry about this too much, as you have plenty of Z-buffer to spare. If you're trying to render an insect 1cm from the camera at the same time as mountains 10km away... you'll probably experience some issues with Z-buffer precision!

As the diagrams should hopefully illustrate, it's actually the width and height of the frustrum that really depend on FOV.

And finally, a tip that really helped me: there are helper functions to ease the calculation of frustrums. Check out gluPerspective(). Instead of doing the math yourself, you just pass it FOV, aspect ratio, zNear, and zFar, and it will helpfully calculate the other 4 boundaries of the frustrum for you.

Not the answer you're looking for? Browse other questions tagged opengl 3d matrix projection frustum or ask your own question.

6
Why / how does XNA's right-handed coordinate system effect anything if you can specify near/far Z values?
8
Understanding the perspective projection matrix in OpenGL
6
Arbitrary projection matrix from 6 arbitrary frustum planes
1
A controlled trapezoid transformation with perspective projecton
1
In 3D camera math, calculate what Z depth is pixel unity for a given FOV
4
Mixing Perspective and Orthographic Projections?
2
How can I set up an intuitive perspective projection/view matrix combination in OpenGL, using GLM?
3
Drawn frustum does not match with glm::perspective
0
Problem with Frustum Culling Right-Handed(LookAtRH GLM)
4
Prevent tile layout gaps