Im just starting out with irrlicht (and c++) for 2d development and I followed the 2d tutorial, so I am able to draw a 2d texture on the screen (With draw2DImage) this seems to work fine.

The ship is drawn once on its original place (I guess 0,0) but it seems asif the ship is being copied and then that copy is.

in my main.cpp I have this:

(Also, the ship's texture is cut off after a while(as seen in the screenshot)).

And also, when I don't 'move' the ship (so I just change it's position once at startup (i.e. this->position.X = 100 this->position.Y = 100) then it behaves normally, so maybe there is something wrong with the way I set up everything? 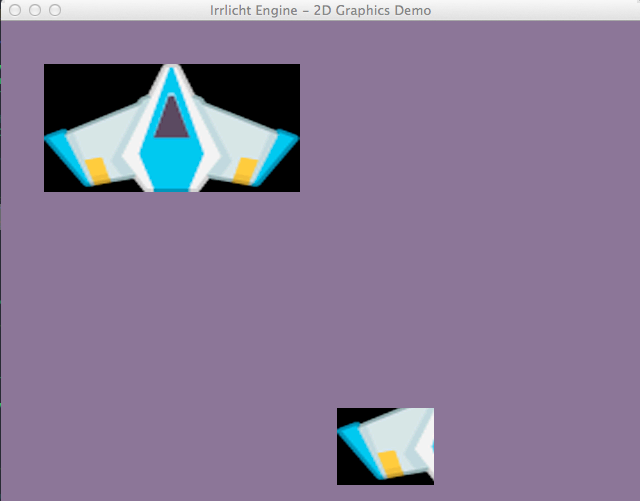 I managed to fix it. The problem was indeed my main loop.

What was causing the issue was that I was using the wrong driver when creating my device. My code for creating a device was this :

But this apparently uses the wrong video card driver, so I had to pass one manually like so:

This seems to have solved the issue for me!

This seems that the screen buffer is not being cleared.

Make sure you have something like driver->beginScene(true, true, video::SColor(255,0,0,0)); in your main loop.

Not the answer you're looking for? Browse other questions tagged c++ 2d irrlicht .