I'm programming a multiplayer game for mobile phones.I'm working on a distributed server architecture for handling lots of concurrent players.

Here is my architecture on my mind: 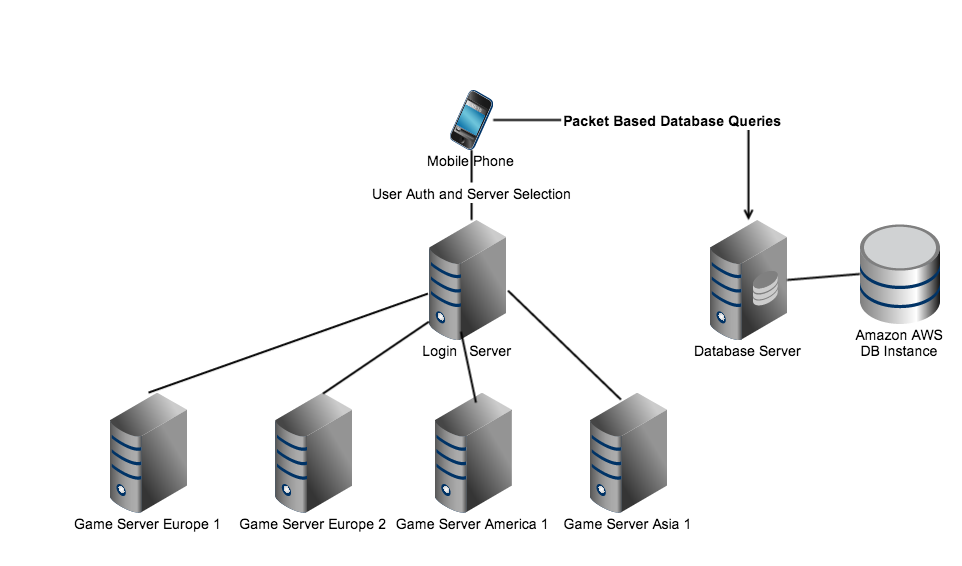 Some questions about that architecture:

1-) How can i provide a secure login on Login Server?Here is what i'm thinking:

2-) How can i secure database queries?Also can that be so slow?Here is what i'm thinking:

Am i on the right way of doing a mmo server design?I'm using Java and Kryonet library for server programming.

Do not have a client talk to a database server. The client talks only to the frontend game server, and nothing else. That server then distributes client requests to the appropriate backend server.

The frontend servers and (most) of all the other servers are distributed geographically. Not distributing the front-end server as in your diagram defeats almost the entire point of having per-region servers. The only thing you really want to share is an account server, and then only as little as possible.

For communication between servers, you can usually use a message queue service of some kind, like RabbitMQ or one of the bazillion similar software packages.

There have been a number of GDC talks and paper on this issue over the years and there's no reason to invent your own architecture when they've already been designed and tested in real-world environments for you. GDC Vault free content

Not the answer you're looking for? Browse other questions tagged java architecture networking client-server security or ask your own question.