I made a post yesterday to see if anyone could understand my problem.

However I did not receive much guidance, probably because my question was not clear.

I have worked on it a little more and discovered the actual issue and now have a clearer picture of what is causing the problem.

As you can see from the image, the boxes are projected correctly along their appropriate axis (all components labeled 1 are from the main white box 1 and vice versa). 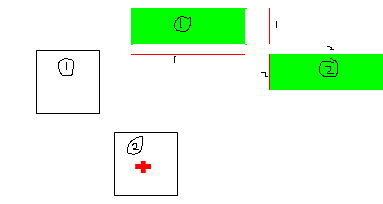 The problem comes when the box is rotated. (See image 2). Box 1 has been rotated but the corner (projection?) in green clearly does not match the shape of the rotated box 1 and is much much closer to box 2 than it should be. The axis projections have changed and axis 1 is on the far left but axis 3 has gone?

The problem with your image is that the green box is first rotated then stretched. With no rotation, this gives the correct rectangle, but then it fails.

Anyway, I don't think you understood clearly how the algorithm works. The algorithm consists to check whether the projection on an axis of the two shapes intersects, for each axis of a nicely selected set of axes. The set of axis consist of the line going through the normal at each face, i.e. a line perpendicular to each face. Luckily in the case of boxes, it implies only two lines per shapes since sides are parallel by twos.

In the following picture, there are two boxes, in yellow and orange. Every axis is depicted by a black line. 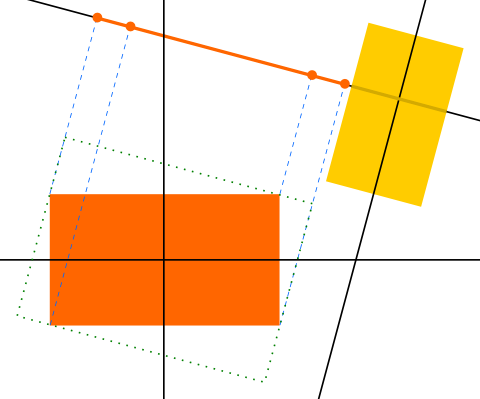 Consider the projection on the slightly dipping axis. Its projection in the orange segment of the line. The segment was obtained by orthogonally projecting the vertices of the orange box (i.e. its corners) onto the line. They are obtained by intersecting the axis with the blue dashed lines, each one of which is a perpendicular of the axis going through a rectangle vertex.

Note : Since each shapes has only two axes those axis may serve as a reference system for the plane. Consider the system generated by the yellow box, I shall call it the “yellow system”. Then each segments obtained by projecting the orange box on each yellow axis corresponds to the sides the axis-aligned bounding box (AABB) of the orange box in the yellow system. In the picture that I remind below, this AABB is reprensented by a dotted rectangle boundary. See how the projected segment correspond to a translation of some sides of the AABB.

Maybe building this AABB was what you were trying to compute. But to compute it nicely, you have to compute the projected segment first anyway, so there is no gain to explicity compute AABBs. In any case, I can't understand how such an AABB can be a rectangle when using two squares with the same orientation.

Not the answer you're looking for? Browse other questions tagged c++ vector separating-axis-theorem or ask your own question.