I have got a floating character, which should be a robot like thing, floating over the ground, whereby I am using the »hovercar« effect described here. Zhe Image below outlines the basic setup of the physics 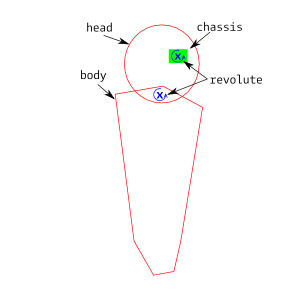 In the next image one can see how the body of the robot should be tilted when it is in motion to the right or left. 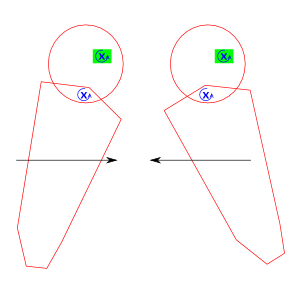 Right now, the movement of the character is implemented so that forces and impulses are applied to the chassis body. Especially if there is an Impulse to the left or right, the desired tilt of the robots body comes to happen, but it fades away when the velocity becomes more constant, or acceleration comes closer to zero.

What can I do to keep the robots body tilted, when it is in motion?

The move of the body is due to the air resistance.
You should apply a -k*v force to the lower part of the body.
Or even more accurate : project the speed vector on the frontmost line of the body : you now have Speed = (sx',sy'). Now apply two different coefficient, k1 and k2, for sx' and sy'. k1 would be the coefficient induced by some air coming face to the body, and k2 is the coefficient when the air comes from below the body (like 8 times smaller).
This way you'll have a realistic behavior : when going up the robot will be aligned, and the effect when going right or left will be the one you seek. 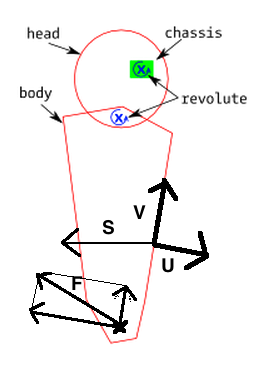 Why dont you apply force during the render thread. You can set a boolean value start and stop the tilt, since its under the render thread it will probably stay tilted since that same force is being applied constantly

Not the answer you're looking for? Browse other questions tagged box2d character motion or ask your own question.

7
How to make bird to fly using box2d
1
How to make box2d mouse joint works similar to box2d setposition
2
How to make a character in a Box2D world jump faster?
7
How can I simulate a floating character in Box2D?
0
Box2D: Adjusting character position for side-scrolling
2
AndEngine rotate all connected bodies
3
In Box2D, how do I make a flexible pole?
1
how can I make camera to follow smoothly
1
Make objects flip Box2D?
3
can't make my unity character move