Self occluding object and alpha blending

Look at the object I've rendered with my app: 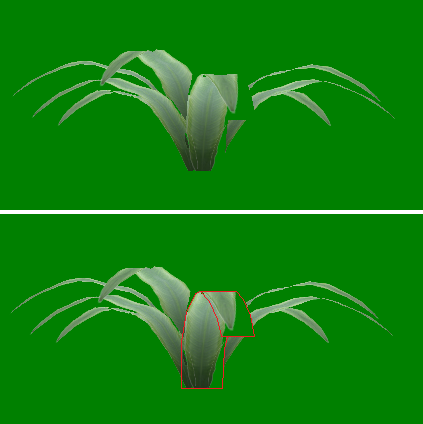 It's the same screen twice, above the original and below I've drawn (by hand :P) the shape of the mesh of one of plant's leaves. You can clearly see where the problem is.

From what I understand, this leave is drawn before the other leaves, writing a higher value to the depth buffer but not changing the pixel color (as it's transparent in that particular place). When the other leaves are drawn then their pixels in that place in the buffer are discarded since they're failing the depth test (they're farther away from the camera).

Now while I understand what the problem is I don't know how to solve it. This whole plant is one object so I can't sort by depth. What should I do?

While there is some interesting research into order-independent transparency rendering, it's extremely complex to implement. And even sorting individual leaves can still cause artifacts where one leaf overlaps itself. So your safest bet is probably Alpha Testing.

This is where you specify a threshold opacity value; anything above that value is rendered 100% opaque (and writes to the depth buffer), and anything below is not rendered at all (and does not write to the depth buffer - ensuring that other, occluded geometry can still be rendered there later).

Older graphics pipelines had a dedicated alpha testing phase for this. Newer ones often just use the discard command under the hood.

The trouble with this is that instead of soft translucent falloff, Alpha Testing gives you sharp aliased edges.

If your texture is relatively crisp-edged and you're usually a long distance from these surfaces, or you're using a post-process antialiasing filter anyway, then these jaggies should not look any worse than typical geometry silhouettes. You can probably stop here.

But if you can get close to the texture or your alpha falloff is very feathery, you'll often see jagged step artifacts. 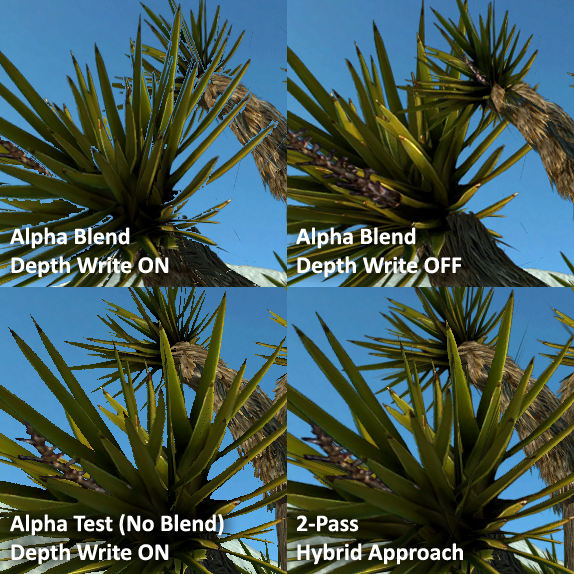 (Images excerpted from the Wolfire Games Blog. These show the artifacts better than the Unity docs image I was using earlier. Note the fringes in the top-left, incorrect sorting top-right, and aliased edges bottom-left. In the bottom-right, the foreground leaves still show aliasing where they overlap the trunk, but the texture detail makes this less noticeable than aliasing against the sky.)

One way to address these is to use a hybrid 2-pass shader. The first pass renders with alpha testing, to ensure proper z-sorting of the opaque portions. The second pass renders with alpha blending enabled and depth writes disabled, to fill-in the translucent fringes without creating the cutouts you see in the image in the original question, where depth writes from one leaf prevent the others from rendering fully.

The fringes can still visually intersect each other in incorrect ways due to the lack of sorting, but in practice this is often not very noticeable, especially in areas of high texture detail or similar colours overlapping.

A hat tip is due here to the awesome devs at Asteroid Base who introduced me to this hybrid strategy, used to great effect in rendering the enemy characters in Lovers in a Dangerous Spacetime.

Not the answer you're looking for? Browse other questions tagged rendering depth-buffer alpha-blending occlusion .

10
Shadow Mapping and Transparent Quads
4
Drawing a depth map properly
5
How to deal with large depth buffer values due to extreme distances
6
overlapping 3d particles not blending nicely when at the same z
3
Possible to create transparency shader which doesn't stack alpha values
2
Dealing with back to front drawing with alpha blending and z buffer for a list of 2d quads
1
Alpha blending, transparence and z-ordering
3
Discard Transparent Pixels in Z-Buffer
0
Drawing a grid over a terrain using a mesh - Shader Depth and Z-Buffer
1
Can't get Direct3D11 depth buffer to work