How can I simulate a floating character in Box2D?

I am creating a jump'n'run game using the Box2D physics engine. The main character should be a robot like creature without legs, floating over the ground powered by a jet engine.

The motion should look like that of a flying saucer: The creature never touches the ground, but also never gets too far from it. What construction of joints, shapes and bodies can do that nicely?

I started by trying to make a kind of pendulum:

However, that isn't working smoothly and the creature bounces around too much. Besides, how can I simulate the jet engine nicely?

UPDATE: over the years I've become a bit more knowledgeable, and I realized Setup 2 can be modeled in a simpler way. I've added Setup 3, which I believe is the best solution.

Your question inspired me to play around with the RUBE editor to find a nice solution. Here's what I came up with: 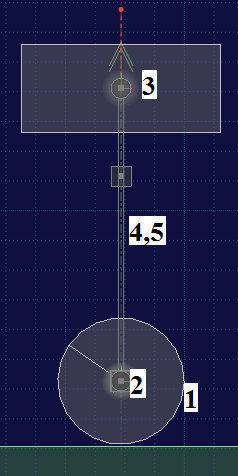 Let's start with the simpler one on the left. It has the following setup (from the bottom up):

The idea would be to only render the ufo part, and use collision filtering so the rest of the physics in your game (with the exception of the ground) does not interact with the wheel part. In the gif you can see that the wheel doesn't climb over other bodies (as it shouldn't), so if you want to include steps in your game then you need to add hidden ramps and/or change the shape of the physics ground so that the wheel can climb up the steps.

If you want more than just vertical motion, then I recommend the second setup: 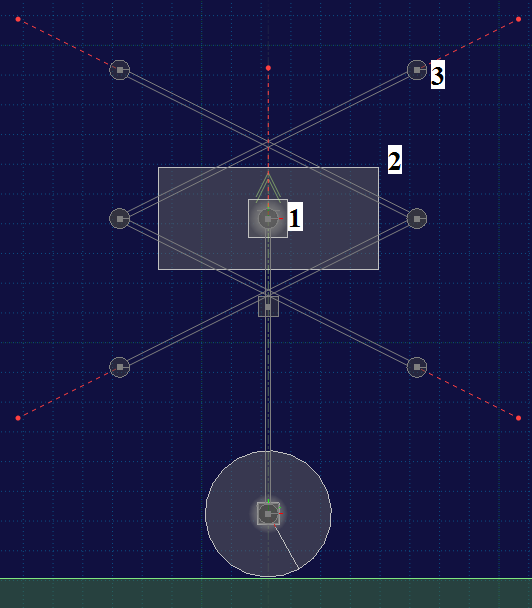 This case is the same as the first, with the following ammendments:

Setup 2 is a little bit complicated, and a slightly better setup can be achieved with fewer bodies and joints: 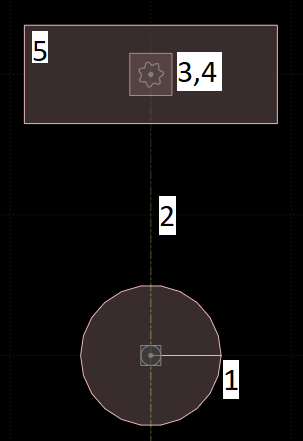 This setup has done away with 3 joints and 1 body compared to Setup 2. All of the joint anchors are now placed in logical locations on the model, as opposed to those floating b2DistanceJoint anchor positions in Setup 2, which should be much simpler to construct and debug in actual game code. Finally, Setup 3 also has the bonus of not over shooting when the wheel runs into a barrier; notice how in the Setup 2 the UFO body overshoots the wheel position an snaps back when the wheel runs into an obstacle at high speed? The bottom b2RevoluteJoint is separating under the load. This doesn't happen to the b2WheelJoint in Setup 3.

Whatever you end up doing, I highly recommend trying it out in RUBE, its a great way to try and find fun feeling physics solutions.

NauticalMile's answer is great (and bonus points for the killer animated diagrams). To give an alternate suggestion that doesn't suffer from the same problems (the wheel collision stopping you from moving past objects that a floating body should be able to traverse effortlessly, I suggest modelling something more closely matched to the reality of your situation. I.e. don't use rigid body collision and springs.

Model your character as a rigid box as normal, but every update do a raycast directly downwards (in the direction of your jet thrust) and measure the distance from the character to the nearest collidable object. Then, apply an upward impulse to your character's body, inversely proportional to the distance from the ground. So the closer you are to the ground, the larger the impulse. That can be a linear proportion, or an exponential proportion, but you don't want it to be too large (i.e. shooting off into the sky) so you'll want to damp it beyond a certain range. But basically it should achieve equilibrium against the effects of gravity, to give the effect of a spring - the closer you get to the ground, the more energy the spring imparts, the further away the less it boosts you. Combined with a damping factor on the motion, you should achieve a balance point some height off the 'ground'.

NB: this force should be constrained to only act vertically on your body, otherwise you start getting into real-world issues where your character is unstable and wants to lurch forwards or backwards depending on what's underneath or what angle the character is at.

Jumping is then simply adding an extra vertical factor to that force - you can't jump infinitely high, but it does have the extra nuance that if you time the jump right (say just after dropping down from a height), you can get extra height on the jump by taking advantage of the bounce effect.

This should have the effect of allowing smooth motion over small obstacles without taking anything away from your horizontal velocity. As the obstacle comes under the jet raycast, the character will shift upwards, but not slow down at all.

Actually, a single raycast may be unstable, especially if you're moving over rough terrain. I'd perhaps do two or three raycasts and take an average of the distance; weighting it if you want to maybe, or discarding measurements outwith a certain deviation from the average. What you're don't want a case where the character moves over a very slim gap in an otherwise flat surface in the world and drops downward sharply because the ray happened to pierce right into that gap.

Not the answer you're looking for? Browse other questions tagged box2d simulations character motion .