How to reduce/remove graphical artifacts?

I'm working on a side-scrolling game that has a 2D grid for rendering to the screen. I'm using OpenGL, and I've optimized my game so that nothing invisible is attempted to be drawn.

As of now, I create a grid based off of my game's window size. Each tile in the grid takes up 32x32 pixels. This grid is made up of square primitives, and each is drawn using an individual vertex buffer object. When the window is resized, the grid changes as well.

My games updating thread will constantly feed images into this grid, and this is what creates my game's scenery.

I've implemented a mechanism for user input to move this grid around (simulating character movement); however, I notice a visual artifacts of slightly slanted horizontal lines that flicker across the screen. They are about 20 pixels in height.

Example of the artifact: 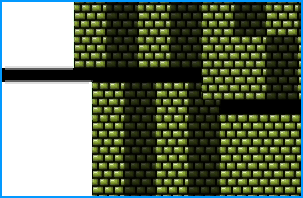 In the image above, you can see the black line that crosses the entire image. This is the artifact I'm receiving.

I'm curious what are the possible causes for this type of visual artifact. My grid is constantly moving back and forth and reapplying the textures to each square during each iteration of my game loop (update thread). However, I see no reason why something like this would appear.

I am using the fixed-function pipeline right now, so I bet that there would be a huge improvement after moving to using shaders. However, I'm not convinced that this alone will solve my problem.

Originally I didn't want to share code, but I'll give some snippets of where all the interesting stuff is happening. For each snippet, I'll explain where it is used and how it connects to other snippets.

Grid Movement
The grid is moved by passing the movement amount to this function. The algorithm in here simply forces the grid location to wrap around a box that has the corners (-1, -1) and (0, 0). That way, emptiness is never seen around the grids border. I send the user input to this function. This function is called on my game's updating thread.

Grid Rendering
This function renders the grid by iterating through each square VBO that is inside of it. It applies the correct texture, translates the square, then draws it. This function is called on my games's rendering thread.

I also went ahead and did a couple test runs to see if I could find anything interesting. Here's what I learned:

It seems to me that when the movement speed is set so that the grid moves back and forth, not all of the square positions are moving fast enough.

Well, the problem is that neither or the code snippets are synchronized. As mentioned before, I have two threads interacting with my grid: the updating/rendering threads. What appears to be the issue is that my rendering thread draws part of the grid (starting from the bottom-left). And then, the updater moves the grid while the grid is being drawn. After the grid is modified in the rendering thread completes the drawing, but at the new location. This causes the horizontal split to occur in the grid.

It makes sense that the movement of the grid never broke when using a movement speed of 2^x * FPS. This is because the grid location never ends up in the middle of the box with the corners (-1, -1) and (0, 0). While although the image is still not synchronized, it does not contain the horizontal line artifact.

Well with so few information on your computations, I'd say your polygon are badly shifted because you're not moving the viewport, but changing the coordinates at every view translation, which is painful. But do you ?

You need to debug here, to see the actual X,Y(,Z,W)coodinates of your vertices before rendering and then if they are wrong, to seek down the incriminating code and fix it.

3
Problem With Smooth Animation In C++/SDL/OpenGL
4
Parallax Scrolling - Layers not preserving their relational positions
7
Generating triangles from a square grid
1
OpenGL resize problems
1
Infinite / Treadmilling Hexagonal Grid
0
How do I create a playing field of collapsing bubbles, as in Tsum Tsum?