What are the advantages/disadvantages of using a polar coordinate system in a video game? [closed]

Would it ever be a good idea to represent an object's position as a magnitude at some angle relative to a reference point, instead of the typical x, y, z coordinates?

What sort of effect would it have on performance?

Clearly there are many disadvantages to this, such as having to convert into x, y, z coordinates when rendering, and possibly suffering from gimbal lock, but would there ever be a circumstance where it would be a better solution to use polar coordinates?

One common usage of polar coordinates, is positioning objects around each other. This can be used to make an object orbit around another object. 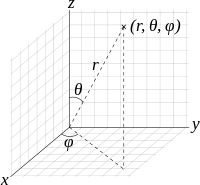 Spherical coordinates can be used for creating three-dimensional orbits in addition to creating a camera LookAt matrix (you can read more about this on this page).

Not the answer you're looking for? Browse other questions tagged coordinates .