I want to calculate the line of sight in a navigation mesh.

What is an algorithm to calculate that "line of sight"? 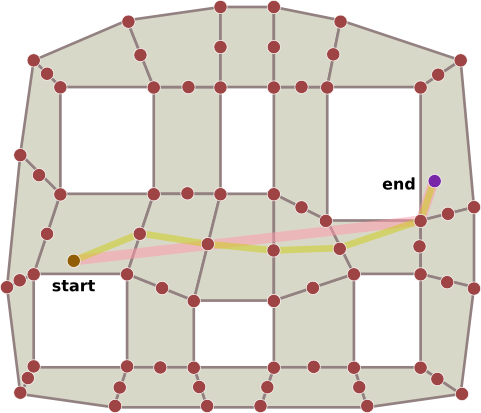 You are looking for a funnel algorithm.

Here you are a simple one

Basically, the algorithm identify edges as portals, and build a funnel that is tested against the vertex of the edges to check if they are inside funnel or not.

In step A the funnel is built with the start position and the portal crossed by yellow line.

As you can check the funnel will be smaller, and smaller, until step F, where the funnel is not possible to be build, because red line makes a bad funnel, so the upper vertex is choosed as new start point and a new funnel would be build if the end point is not in that mesh.

Realize that this kind of algorithm lets a simple solution to the model size problem too, because you can consider that the portals are smaller by the 2xradius of your model. 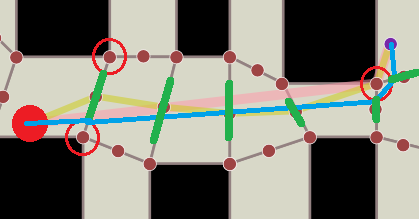 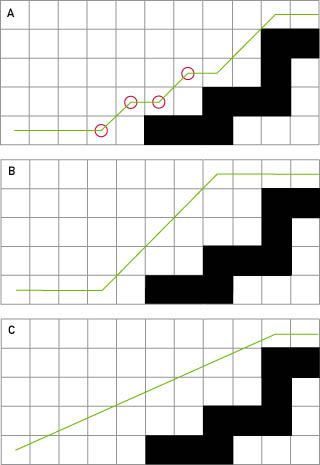 A Gamasutra article has the following pseudo code example:

This algorithm does as you want, where the Walkable function is essentially a line-of-sight function, but slightly improved to also include situations where the path is visible, but not walkable (i.e. pits, traps, restricted zones).

Not the answer you're looking for? Browse other questions tagged ai path-finding navmesh or ask your own question.

16
A* navigational mesh path finding
9
How can I generate a 2d navigation mesh in a dynamic environment at runtime?
10
Pathfinding: Tile-Based Navigation Mesh
2
Find shortest path (quickly) on the surface of a 3d model?
0
A* Quad/Oc Tree path-finding vs Navigation Mesh path-finding
3
Navmesh awkward path generation with string pulling due to “inner” vertices
2
Find a path centered on the edge between traversable tiles
0
Nav Mesh Agents are not moving along the mesh