How do I make a cube move by rolling?

I am learning jMonkeyEngine by making some small games with it. I have a simple rectangular cube that I want the player to be able to roll around the game world.

When he presses the arrow keys, the cube should make a roll in the direction of the key press. (So, for instance, pressing the right arrow key makes the cube roll 1 WU to the right.)

The problem isn't how to move the cube (I can do that with the move() method), but with how to make this rotation effect so it doesn’t look like the cube is moving to the destination, but is actually rolling.

The rolling effect should be like the cube in Bloxorz. (Here's a gameplay video.)

After I got some good help below, I have come up with a test solution, which I want to share with you.

Conceptually, you can do that by animating the rotation of the cube (or as in Bloxorz, a cuboid) 90 degrees around one of its edges. You don't need move() at all!

Side-on view of one rotation: 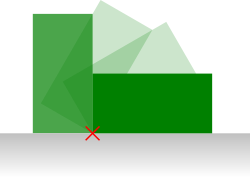 Here's a seriously good JMonkeyEngine tutorial showing you how to rotate Boxes around pivot Nodes. It explains everything step-by-step. These are the important lines:

Once you've got that, rolling around becomes successive rotations around different pivots: 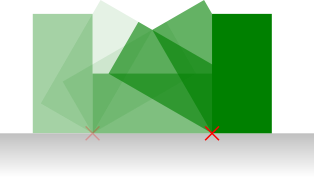 Not the answer you're looking for? Browse other questions tagged java physics rotation movement jmonkeyengine .

14
How do I make an entity move in a direction?
3
How can I move an object towards another along a straight line
3
How can I make an object move in four directions relative to its rotation?
2
How to move a cube withour rolling it?
1
How to make sprite move in any direction?
0
Convert linear velocity to angular velocity for a ball / sphere (Rolling Ball Maths)
0
Make transform.up face toward velocity while preventing transform.forward from rolling?