How can I generate a lightning bolt effect?

Is there an algorithm to generate a lightning bolt?

I would like an algorithm that generates a list of segment or point objects specifying where the bolt will land. The method would need a start point parameter, along with an endpoint. The bolt should have random branches coming off it, and zig-zag at random intervals. The result will be a random lightning effect that would look somewhat like this 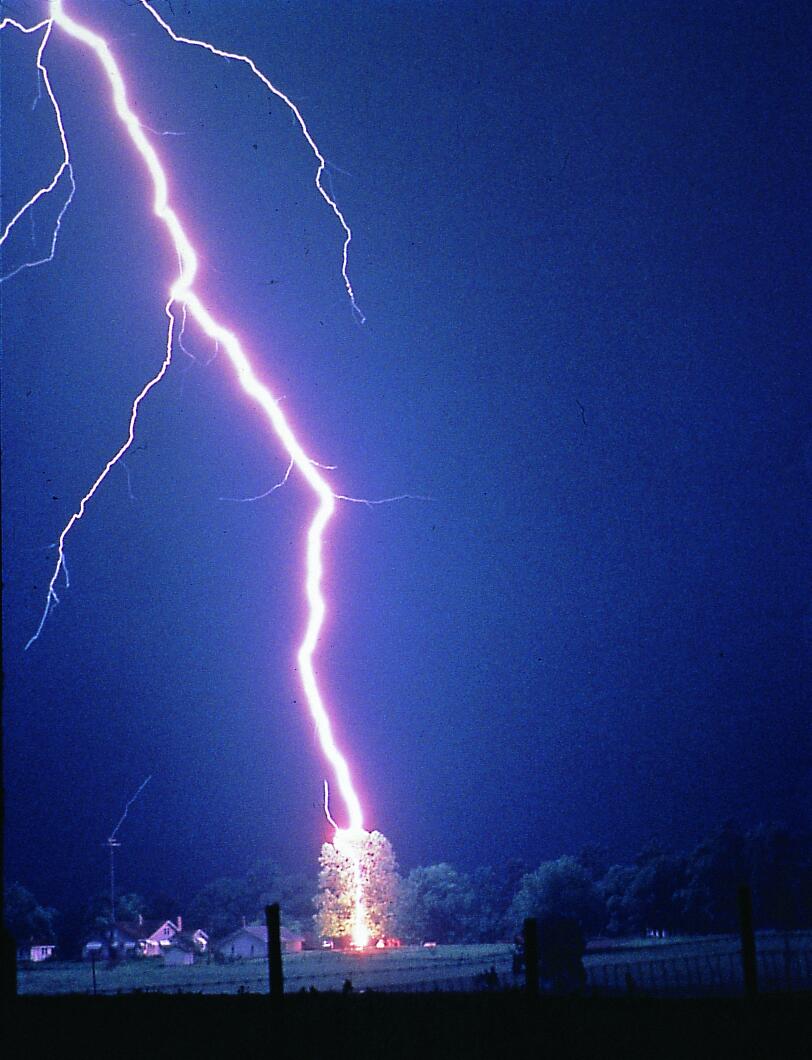 If anyone knows of an algorithm that this may work for, help would be greatly appreciated!

There's a fairly straightforward algorithm you can use to generate lighting bolts.

Choose a point on that line (approximately or exactly in the middle), called S and split the segment into two line segments (O->S and S->E). Displace S away from the original line segment (along the segment's normal) by some small random amount. This gives you a single "bend" of lightning.

After you compute the bend, based on a small random chance you'll want to add a third line segment (usually an extension of the O->S segment). This is how you produce the "forks" in the lightning. You'll usually want to track information about the intensity of the bolt during this generation process, because you'll want the forks to be dimmer or have a more subtle blur:

Then, repeat the above process for all of the new line segments you have; you'll need to choose a repetition amount that produces shapes you like:

There's a fairly clear explanation of this technique at my friend's blog here (it's where I shamelessly stole the pictures from); it goes into additional depth about adding the glow effect as well.

I would recommend an alternative approach: the rapidly exploring random tree (RRT). One cool thing about it is you can get it to go around corners, or explode in all directions.

The algorithm is really basic:

ExtendToward can allow you to do interesting things to the tree as well. For one thing, if you have obstacles (such as walls), you can get the tree to grow around them simply by rejecting extensions that collide with walls.

This is what it looks like when you don't bias the sampling toward the goal:

Some cool properties of the RRT once its finished:

Not the answer you're looking for? Browse other questions tagged algorithm graphic-effects or ask your own question.

3
How can I implement beam effects like these?
3
How can I create a “cracked glass” material?
1
How to create glowing line with andengine?

4
Factors to consider when building an algorithm for gun recoil
2
Pygame water ripple effect
7
How can I implement an Iris Wipe effect?
28
Procedural river or road generation for infinite terrain
3
Divide rectangular image into fixed number of random sized rectangles + 1 fixed size rectangle
4
Algorithm for game difficulty/pacing curve generation in single player RPG
0
Hash Distance & Angle To Produce Unique Value
8
How can I create a contrail effect for a spaceship in motion?
0
Recognize that user has traced a path of vector points with mouse