How can I add and subtract convex polygons?

I have two 2D convex polygons overlapping each other. I am looking for an algorithm to subtract and add them. The result must be a single concave polygon or (even better) a set of biggest convex ones forming the concave result (e.g. triangles).

Well, it seems we are talking about Constructive Solid Geometry here. I have implemented CSG on a commercial level so I know a thing or two about it.

The classic paper about CSG is called Merging BSP Trees Yields Polyhedral Set Operations, to be honest it's too much to explain here, but briefly speaking the algorithm deals with polygon(s) that lay on the same plane as a binary space partitioning, basically constructing a BSP tree from each polygonal mesh. The second step is to merge those BSP trees; you simply take one tree and insert it into the other. The algorithm then proceeds to explain how to deal with each leaf node for dividing and substracting the nodes, nodes that are not needed in the final shape will be removed, others will be given the appropriate parent.

But wait! That paper is basically speaking about polygonal meshes and 3D planes, NO?

The algorithm can be generalized into any dimension, so in your 2D case it's easy to use line segments instead of plane as the binary partitions. So each polygon will be converted into a BSP tree than the two will be merged. Finally you traverse the resulting tree to generate the final polygon,

Note that this algorithm and CSG in general doesn't deal with rendering and mesh faces directly and isn't really rendering ready, so you need to extract the faces of the final BSP trees. I also find ray tracing an easier approach for rendering the CSG result, you only need the rays to traverse the tree instead of extracting and actually splitting the faces (remember we only deal with binary partitions).

Regarding numerical robustness. It's good to note that there are two types of geometric computations,

The concept of plane-based representation of polygonal meshes was first described by Sugihara and Iri [SI89]. This kind of representation provides one important advantage when it comes to tasks that involve changing the topology of solids represented by meshes like the evaluation of Boolean expressions: no new primary geometry information has to be constructed to obtain the resulting polyhedron 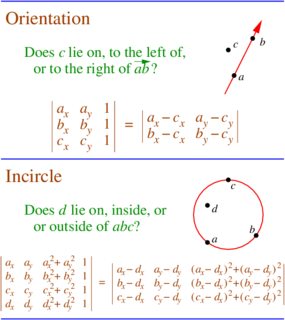 And finally I would like to add, if you like to start your BSP CSG implementation I would recommend starting on BSP Faqs.

Going by your example:

Once you've accumulated all the vertices for the new polygon, perform a triangulation algorithm on it. The ear clipping method is easy to implement, but there are faster options out there.

Important: ensure the vertex you start at isn't inside the other polygon (check this article for point in polygon tests).

Iterating over each edge, to check for an intersection would be an O(n^2) algorithm. You could speed it up by first finding the vertices that are inside the other polygon, as the edges linked to those vertices will be the intersecting ones.

If you want a concave polygon, just pick the closest edge between the two input polygons, and add two new edges: 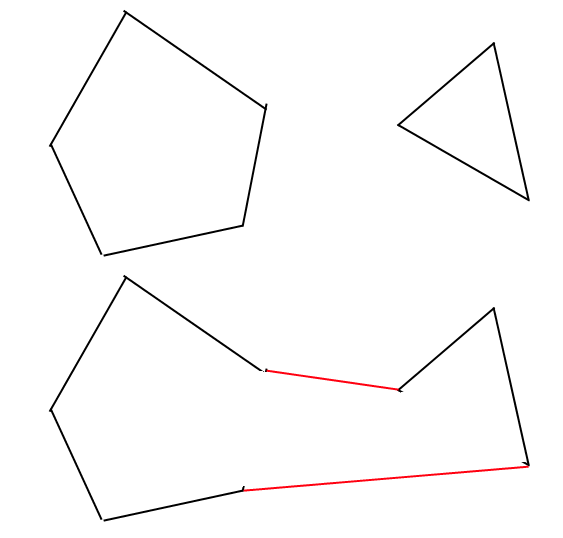 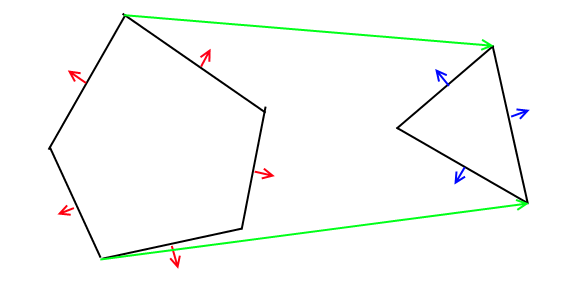 One approach is iterative in that it adds vertices from the second polygon to the first, one at a time, evolving the first polygon into a container that encompasses everything.

Here's a diagram illustrating the process for the first vertex:

A faster method is to find the list of edges on each polygon that do not face the other polygon, remove everything else, and connect the endpoints of the remaining line strips to each other.

Perhaps someone else can chime in with some subtraction advice.

Not the answer you're looking for? Browse other questions tagged algorithm or ask your own question.

1
Given a start and end point, how can I constrain the end point so the resulting line segment is horizontal, vertical, or 45 degrees?
1
How can I run and jump at the same time?
1
How can I develop a Lights Out solving algorithm?
14
Algorithm for creating adjacent triangles
1
Filling in gaps in a grid
2
How do I convert a partially transparent image into polygons?
0
How can I write my scoring system and add a score multiplier?
4
How does transvoxel algorithm work and how can I implement It?
0
How to get a reflex edge on a non-convex mesh
10
What are good algorithms to generate borders / state areas on 2d star maps?