Why is my gameloop slightly faster than 60 per second?

Here is my gameloop (taken from http://www.koonsolo.com/news/dewitters-gameloop/) which is supposed to limit the game (logic) updates to 60 per seconds and render as fast as the device allows:

However, when I run this, I'm getting anywhere between 62 and 65 as you can see from my logcat output: 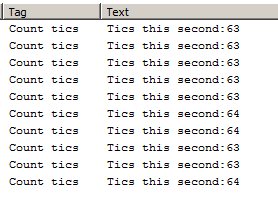 So, the loop doesn't do what it's supposed to.

Your main problem is likely this:

If you want to continue defining your tick length in ticks per second for whatever reason, you could try something like this:

Although this isn't guaranteed to result in 60 ticks per second it will be closer than what you currently have. If updateLogic() often takes longer than the length of a tick then you may get less than the amount of ticks you want per second. The precision of System.currentTimeMillis() also varies between machines and could affect your ticks per second, or the time between two ticks.

In either case I would change skipTicks to millisecondsPerTick because I think it better describes the variable.

First, why does the gameloop from http://www.koonsolo.com/news/dewitters-gameloop/ deliver its desired frame rate while your version doesn't? Because their integer division works out exactly:

SKIP_TICKS is 40 (with no rounding). With increments of 40 msec, you get exactly 25 intervals in 1 second.

But you're seeing higher tick counts, 63-64 (maybe up to 65 as your question states). What's going on? I suspect the problem is that you're using a low resolution system timer that is too close to the computer's own basic system timer. They aren't accurate (or repeatable) when timing intervals are too near the basic system timer interval. For a discussion see

where the first sentence states "There are significant flaws in the millisecond timer that ships with the normal JDK." That message also points to a high resolution timer article and library that provides accurate timer resloution down to fractional msec.

Those links are old, and I don't know the state of Java timers today, but the approach remains the same. If you want precise and repeatable msec-range timing, use a high resolution timer and, along the way, stop doing integer math where the rounding error is anywhere near 4%.

Not the answer you're looking for? Browse other questions tagged game-loop timestep .