How to take into consideration gravity when moving AI

I'm making a 2D game. There is currently a helicopter flying around, controlled by the player. It's controlled using the arrow keys: UP, LEFT and RIGHT.

It's physics is as follows:

Whenever UP isn't pressed, dy accelerates in constant acceleration, indefinitely towards down. (Gravity). dx stays in it's current value.

When UP is pressed, dy accelerates in constant acceleration from whatever it currently is, up to 4 (upward, until it reaches speed 4). dx stays in it's current value.

When LEFT is pressed, dx accelerates in constant acceleration, from whatever it currently is, up to -4.

When RIGHT is pressed, dx accelerates in constant acceleration, from whatever it currently is, up to 4.

(When LEFT or RIGHT are pressed and UP is not pressed simultaneously, as I said: dy increasingly becomes smaller and smaller, because gravity is affecting the helicopter)

All of this makes the helicopter often follow arches in the air, rather than straight lines.

This creates physics that seem quite realistic.

The opponent helicopter, an AI, should move using the same physics system.

Lets say the AI wants to get from where it currently is, to point B. 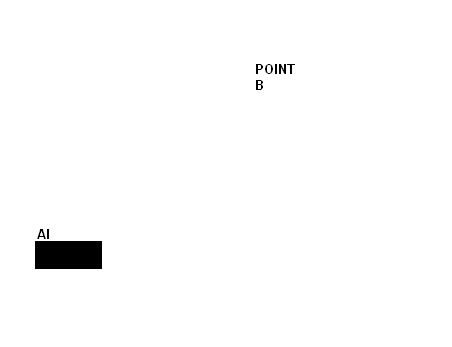 If there was no gravity and no gradual acceleration in the game, it would be easy. I would simply draw a vector from the AI's position to point B, and make the AI follow it.

But since there is gravity and gradual acceleration, the AI can never move in a straight line (almost). what would be the best way to make the AI go to point B, as time-efficiently as possible?

How can I take the gravity into consideration when moving the AI toward a specific destination?

(If it's easier to explain, please consider point B to be on the same level on the y-axis as the AI, and not in diagonal to it.)

Same with y. Remember to bound speed so it's between zero and the max speed. If the enemy has a very slow speed at some point and it"s trying to stop, it may begin to move in the opposite direction. Do not allow it. Stop it if it's slowing down and its speed is under 1 * Acc.

Long version: If there are no obstacles, movement on y-axis is completely irrelevant to (and does not affect) movement on x-axis. So the question you describe can be broken into two separate questions.

CS.x & CS.y are our current speed on the x and y axises.

TS.x & TS.y Is the time it would take you stop only vertically or horizontally considering your current speed in the relevant axis.

D.x & D.y are the distance on each axis.

tl;dr:you continue to accelerate (if possible [unless you reached top speed]) on x-axis until you reach a spot where the following condition is true:

The same with y.

One approach I've used for a similar problem was to first draw a vector to the target, then compare that to the current velocity direction.

So, take the signed angle between the velocity vector and the target vector and apply a thrust relative to the size of the vector.

So if the angle a between the red velocity vector and the green target vector is negative then apply positive thrust, otherwise apply no thrust and let gravity sort it out. 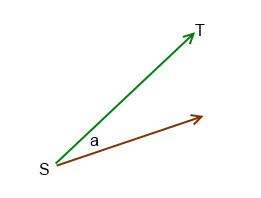 Note that you'll have to treat the four quadrants where the target may be differently (as if the target had been in the upper left corner a positive angle would have required applying thrust).

Also, make sure to apply the amount of thrust relative to the deviation from the target velocity.

Technically this isn't taking gravity into account, it's compensating for the current state and it means the AI helicopter may not fly in a straight line to the target but will wobble a bit. This may or may not work for your game.

You could simply recalculate the movement each X frames. Assuming you don't put too many frames between, but enough so it doesn't affect performance, the gravity on a helicopter shouldn't be strong enough to really see the trajectory changing. Plus, I think a player could possibly move the same way, adapting to the gravity while moving and not having it planned.

Not the answer you're looking for? Browse other questions tagged 2d physics ai .

4
What AI technique should I use to control a car in a bumpy environment?
12
Impulsioned jumping
2
How should I implement basic spaceship physics?
1
Adding gravity to arrival steering behavior
0
Irregular gravity bouncing
3
Do physics engines take shape into account or they operate solely on predefined variables?
1
3D Planetary gravity
0
Platformer AI Jump Calculation
0
2D Sidescroller Gravity
0
How could I move an object, while respecting the gravity and other related physics in Unity?