How do I get parabolic movement in Unity using Rigidbody2d?

EDIT: It was the Animator after all. Apply Root Motion basically nullifies any physics based work.

I "know" this answer but I can't figure out what can possibly be wrong. My code is in FixedUpdate(). My Rigidbody2D has a Gravity Scale of 4 and a Mass of 1. For whatever reason a Gravity Scale of 1 just isn't strong enough to keep it from floating away. In the pictures below the little cubes should be marking each frame.

Using the below code I get a jagged leap movement. The object shoots upwards and falls like a feather. 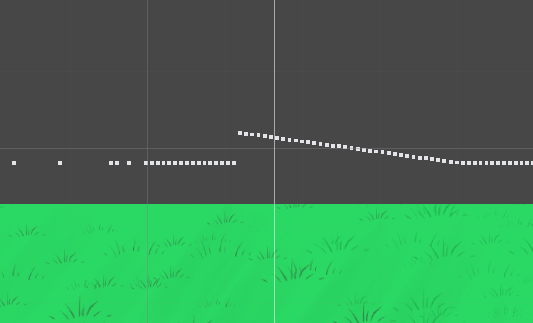 And using another suggestion I distribute the force over a second of time.

And I get a more desirable but still just as wrong movement where there is no hang at the top of the jump.

From what I thought I knew neither of these should be happening at all. The object shouldn't be falling at a constant speed like it is. Does anybody have any suggestions?

The character is animated if that can possibly have some sort of effect but I don't imagine it would.

Make sure that if the GameObject is animated that you turn off "Apply Root Motion". It is a setting on the "Animator" component. It will mess with the Physics of the object. I do not know the particulars. But I turned it off and voila, everything works fine now.