Okay, so this is a problem I've been trying to figure out for quite some time. Mine is a 2D platformer game with a world made up of (usually) immobile tiles and mobile sprites, both of which use AABBs to represent their hitboxes. This game is NOT grid-based due to some complications with moving layers of tiles. 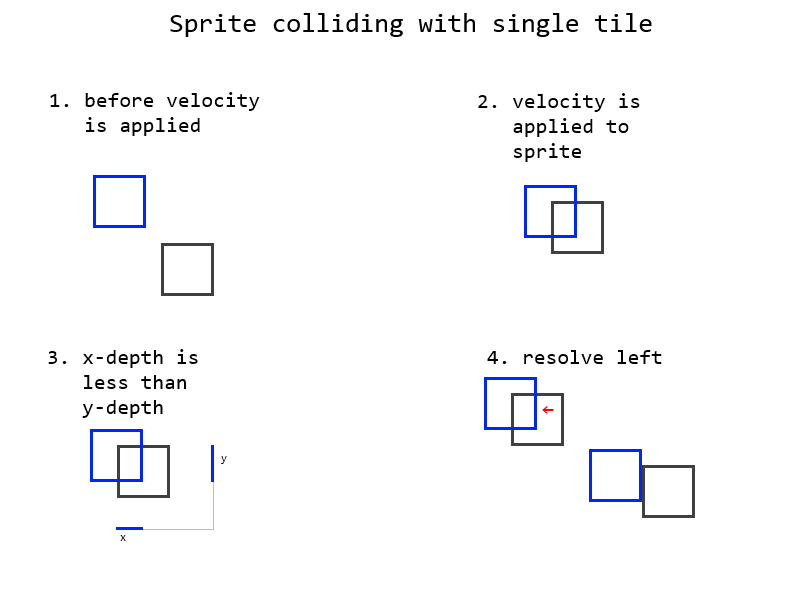 This is simple enough, and it works pretty well. That is, until you have a sprite colliding with more than one tile. As, by their nature, each collision has to be checked separately, different collisions may have different direction to resolve in. For example, if a sprite is trying to walk across a row of tiles, for one frame they will intersect the next tile such that the horizontal depth is shorter than the vertical depth. As the collision says "resolve left", it will be pushed back and will be stuck on the corner. 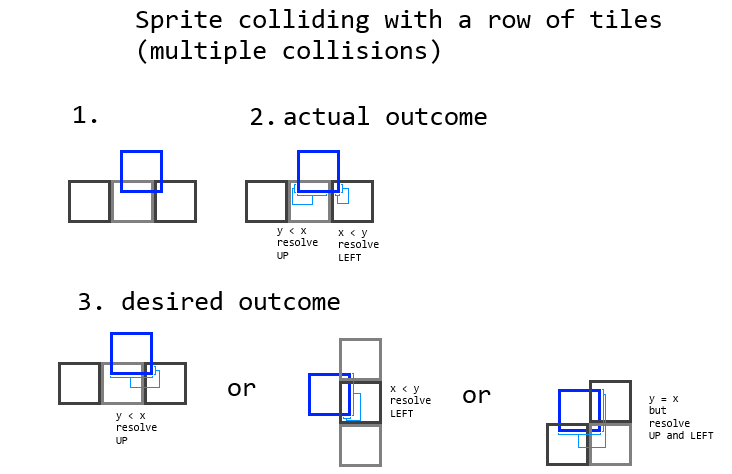 I've been mulling this problem over, on and off, for quite some time, and several solutions have come to me, but all have flaws. I could mark certain sides as unreachable, but without a grid-based engine, determining "unreachability" is remarkably complex, especially with moving layers of tiles always a possibility.

Another possible method would be to predict collisions before they happen and "work back" the movement to the point of the collision, I suppose, but I'm not sure how the math on that works.

I feel that I'm missing something incredibly obvious, especially since games from the 80s have already solved this problem.

The problem lies in your method of collision resolution. Your method goes as follows:

The problem with this, is that it can easily move the player in the wrong direction. You can see how this might happen in the image below: 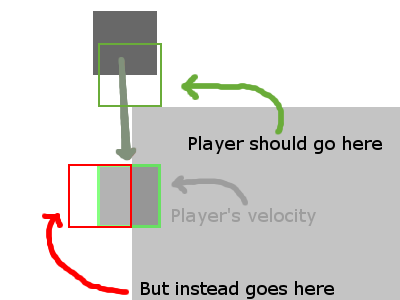 The solution to this problem is actually pretty simple. Instead of using the above method, you resolve collision like so:

Now I hope that you didn't throw your depth check code away, because you are still going to need it for steps 3 and 6.

Using this method, you will not only not have to worry about collision bugs like the one in the scenario in the above image, but this method also can handle collision with multiple tiles.

You're overthinking the problem and conflating a couple of issues. But that's okay because, as you said, this is a very solved problem with lots of great answers out there.

Let's break it down:

Not the answer you're looking for? Browse other questions tagged c# collision-detection monogame collision-resolution aabb .

5
How do I resolve a collision of a rectangle with two rectangular tiles at once?
2
Architecture for game character movements with user input and a finite state machine
1
Simple collision resolution in a platformer game

4
Collision with tile corners/seams in 2D platformer
0
Having to check collisions twice per game tic
0
implementing collision detection and handling for tiled 2D world with smooth wall sliding
2
How do I resolve a collision of a circle with two rectangle corners?
1
AABB collision resolution issues
4
2D Platformer AABB collision issues
5
2D Platformer Multiple Body Collision Response
0
Swept 3d capsule intersection with AABB, what am I actually supposed to use to accomplish this?
0
How to do topdown collisions properly?