How to optimize the distance function?

While developing a reasonably simple RTS-like game, I noticed my distance calculations were causing an impact in performance.

My question is exactly about that. I want to know what alternatives game developers have for checking distances, other than the usual sqrt(x*x + y*y) approach, which is fairly time consuming if we are performing it thousands of times per frame.

I'd like to point out I am aware of the manhattan distances and squared distance comparisons (by skipping the sqrt bottleneck). Anything else?

[EDIT] I am deleting the first section of my answer, because people are hating it. The question title was asking for alternative distance functions before the edit.

Edit, well after @Byte56 pointed out that I didn't read the question, and that you were aware of the squared distance optimization.

Well in your case, unfortunately we are in computer graphics almost exclusively dealing with Euclidean Space, and distance is exactly defined as Sqrt of Vector dot itself in euclidean space.

Distance squared is the best approximation you are going to get (in terms of performance), I can't see anything beating 2 multiplications, one addition, and an assignment.

So you say I can't optimize the distance function what should I do ?

The point is, instead of checking player intersection with each object in the scene, each frame. You can easily use spatial coherency to your advantage, and only check the objects that are near the player (that are most likely to hit/intersect.

This can be easily done by actually storing those spatial info in a spatial partitioning data structure. For a simple game I would suggest a Grid because it's basically easy to implement and fits dynamic scene nicely.

Every cell/box contains a list of object that the bounding box of the grid enclose. And it's easy to track the player position in those cells. And for the distance calculations, you only check the player distance with those objects inside the same or neighbor cells instead of everything in the scene.

A more complicated approach is to use BSP or Octrees.

If you need something that stays linear over any distance (unlike distance^2) and yet appears vaguely circular (unlike the squarish Chebyshev and diamond-like Manhattan distances), you can average the latter two techniques to get an octagonally-shaped distance approximation:

Here is a visualization (contour plot) of the function, thanks to Wolfram Alpha: 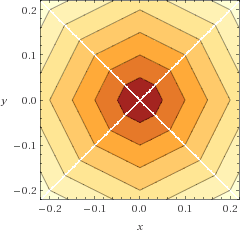 And here is a plot of its error function when compared to the euclidean distance (radians, first quadrant only): 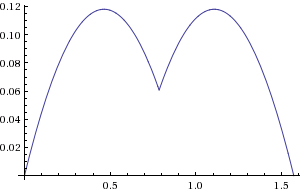 As you can see, the error ranges from 0% on the axes to approximately +12% in the lobes. By modifying the coefficients a bit we can get it down to +/-4%: 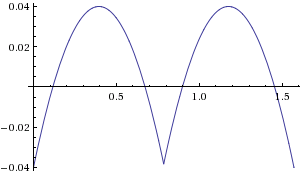 While searching the web for a name for this algorithm, I found this similar octagonal approximation:

Is this going to be faster than my version? Who knows... depends on the compiler and how it optimizes each for the target platform. My guess is it'd be pretty difficult to see any difference.

In a large game world with many actors, it is not scalable to keep checking the distance between one actor and all the others. As more players, NPCs and projectiles enter the world, the number of comparisons that need to be made will grow quadratically with O(N^2).

One way to reduce that growth is to use a good data structure to quickly discard unwanted actors from consideration.

We are looking for a way to efficiently iterate all the actors that might be in range, whilst excluding the majority of actors which are definitely out-of-range.

If your actors are fairly evenly spread across the world space, then a grid of buckets should be a suitable structure (as the accepted answer suggests). By keeping references to actors in a coarse grid, you need only check a few of the nearby buckets to cover all the actors which could be in range, ignoring the rest. When an actor moves, you may need to move him from his old bucket to a new one.

For actors which are less evenly spread, a quadtree may do better for a two-dimensional world, or an octree for a three-dimensional world. These are more general purpose structures that can efficiently partition large areas of empty space, and small areas containing lots of actors. For static actors there is binary space partitioning (BSP), which is very fast to search but unsuitable to update in realtime. BSPs partition the space using planes to repeatedly cut it in half, and can be applied to any number of dimensions.

Of course there are overheads to keeping your actors in such a structure, especially when they are moving between partitions. But in a large world with many actors but small ranges of interest, the savings should be far greater than the costs.

Consideration of how the expense of an algorithm grows as it receives more data is called computational complexity is crucial for scalable software design. Sometimes simply choosing the correct data structure is enough. Costs are usually described using Big O notation.

(I realise this is not a direct answer to the question, but it may be useful for some readers. My apologies if I have wasted your time!)

How about the Chebyshev distance? For points p, q it is defined as follows:

Furthermore, let E be the Euclidean distance and C be the Chebyshev distance. Then:

The upper bound probably isn't much use since you'd have to calculate the square root, but the lower bound could be helpful - whenever the Chebyshev distance is large enough to be out of range, the Euclidean distance must be too, saving you from having to calculate it.

The trade-off, of course, is that if the Chebyshev distance is within range, you'll have to calculate the Euclidean distance anyway, wasting time. Only one way to find out if it'll be a net win!

Efforts were made in the past to optimize sqrt. Although it no longer applies to today's machines, here is an example from the Quake source code, which uses the magic number 0x5f3759df:

A detailed explanation of what's going on here can be found on Wikipedia.

In short, it is a few iterations of Newton's method (a numerical algorithm which iteratively improves an estimate), with the magic number used to provide a reasonable initial estimate.

As Travis points out, this kind of optimization is no longer useful on modern architectures. And even if it was, it could only provide a constant rate speedup to your bottleneck, whilst algorithmic redesign might achieve better results.

A very simple local optimization is to simply to check a single dimension first.

So just checking fabs (x2 - x1) as a first filter may give an appreciable gain. How much will depend on the size of the world versus the relevant ranges.

Furthermore, you can use this as an alternative to the spatial partitioning data structure.

If all relevant objects are sorted in a list in x coordinate order, then nearby objects must be nearby in the list. Even if the list becomes out of order due to not being fully maintained as objects move, then given known bounds of speed you can still reduce the section of the list to be searched for nearby objects.

Not the answer you're looking for? Browse other questions tagged collision-detection mathematics performance optimization .

30
Are there any disadvantages of using Distance Squared checks rather than Distance?
5
Find Minion with shortest path

13
In general how often and when should I optimize my code?
2
Constrained/penalized distance function
1
How to limit the distance of a point?
13
How can I optimize a collision engine where order is significant and collision is conditional based on object group?
3
How to optimize my A* algorithm
1
Will function-local objects affect my performance over time?
0
Finding the Distance between 2 Objects
176
Why is it so bad to optimize too early?
0
How to optimize collisions
1
Distance function on a pacman plane