There are a couple of ways to handle collision, but the simplest way is to use AABBs (Axis-Aligned-Bounding-Box). AABBs are made up of four coponents: left, right, top, and bottom (in my code, I just call refer to them as min and max X/Y). You can check for collision be checking if the boxes are aligned with each other on all axis. 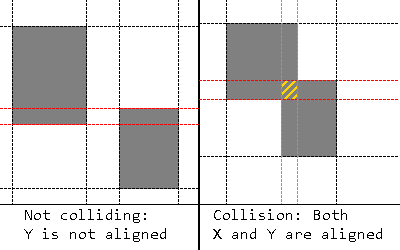 To implement this, you would create a class called "AABB". This class would contain four variables of a numerical type: left, right, top, and bottom. You would then have a method called something like collidesWith. This method would return a boolean and it would accept another AABB as an argument (we will name this argument other for now). This method would return true if all of the following conditions are met:

Once you have written this class you would then write a method inside of the tilemap class to return the AABB for the tile at the given X/Y coordinates. This method would return a new AABB instance with the left, right, top, and bottom variables set appropriately. Here is an example implementation:

Now that these methods have been written, you must also add an AABB variable to the player.

You then repeat this step again, except on the Y axis. And don't forget to update the AABB after each movement.

Simply predict next player position. If it passes through a 3 block don't move.

Do this by creating a checkCollide() function before updating the tilemap.camx-y.

Take into account current position, x,y, ImageIcon height and width and compare to map values on the direction of player sprite.

PS : You should definitely use better named variables.

Because it's otherwise hard for us to help you correctly, plus in one month you won't remember and understand anything of what you've done.

Easier way: Make a new Rectangle(x, y, width, height) for each of the objects, and check if rect.intersects(otherRect)

Not the answer you're looking for? Browse other questions tagged java collision-detection tilemap or ask your own question.