How does the Simple Stupid Funnel Algorithm work?

Working with the funneling algorithm shown on Digesting Duck I'm not sure how the detection of the funnel works.

Can someone explain the method clearly to me or suggest an alternative way of detecting the funnel and if the funnels sides overlap?

The algorithm start with a path you found earlier, in this case a list of triangles: 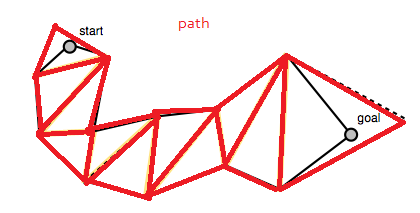 This portals list is shown as the yellow dotted line segments in his pictures. 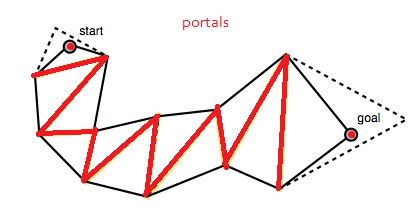 The algorithm starts with a wide funnel and proceeds by iteratively moving the funnel sides forward along the portal side points (the end points of the line segments) as long as this tightens the funnel (A-D). 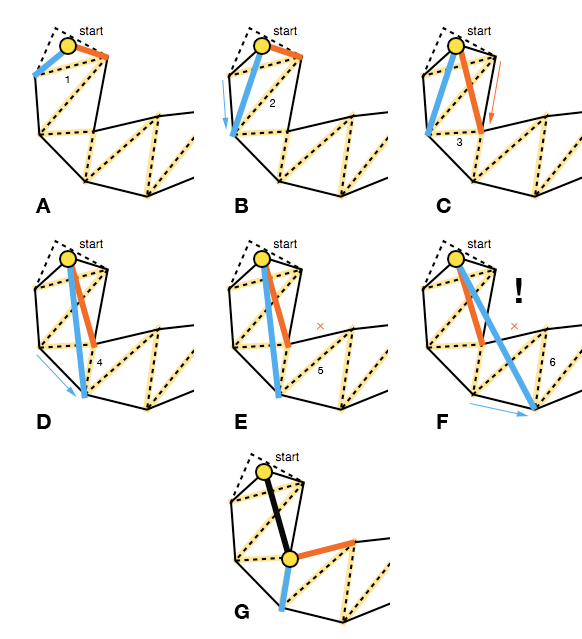 This means each move forward should move the funnel edges inward, this can be checked with the cross product of the vectors representing the old side and the potential new side (P × Q in the image below; also see triarea2 in Mikko's code). If a move forward for a side would not tighten the funnel, we don't update that side for the current iteration of the portals (E). 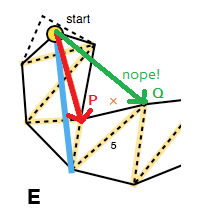 The other case that needs to be handled is when the funnel degenerates to a line segment. To account for this the algorithm checks if one of the sides is on the "wrong" side by using the cross product again, this time of the vectors made by the funnel apex and the right and left side end points respectively (R × S in the image below). 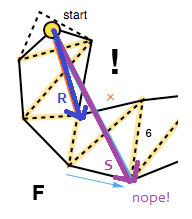 If this is the case, the vector from the funnel apex and the correct side end point is added to the smoothed path (R in the image above) and the algorithm is restarted with its end point as the new apex (F-G), unless, of course, if it is the goal point.

Not the answer you're looking for? Browse other questions tagged c++ algorithm path-finding .

2
Pathfinding with MicroPather : costs calculations with sectors and portals
16
A* navigational mesh path finding
1
How does Terrain following work on height map?
9
Bounding boxes in octrees
2
Funnel algorithm
4
How does transvoxel algorithm work and how can I implement It?
1
Correct way of combining A* and funnel
1
Simple stupid funnel algorithm without visible points