You may skip this if you already know how the algorithm works.

The algorithm works by storing lighting information in the form of spherical harmonics in a 3D grid, where initially the data in each cell of the grid comes from rendering an extended shadow map (reflective shadow map) that also includes color and normal information, besides depth. The idea is that essentially all pixels seen by a light source are the cause of the first bounce of indirect illumination, so you store the required information alongside the ordinary depth buffer you use for shadow mapping, and sample all the data to initialize the 3D grid. The information in the 3D grid is then propagated iteratively by (for each iteration) propagating the information in one cell to all of its 6 direct neighbours (above, below, left,right, top, bottom). To light the scene using the information in the grid, you apply a full screen pass over your scene, and for each rasterized pixel you have the world space position of the rasterized surface available (e.g. from G-Buffers in deferred shading), so you know which cell of the grid a certain pixel on screen belongs to.

This is working fine for the most part, here are two images without simulated GI and just a hardcoded ambient term, and next to it an image with the LPV algorithm. Notice colored reflections on surfaces, better depth detail, etc. 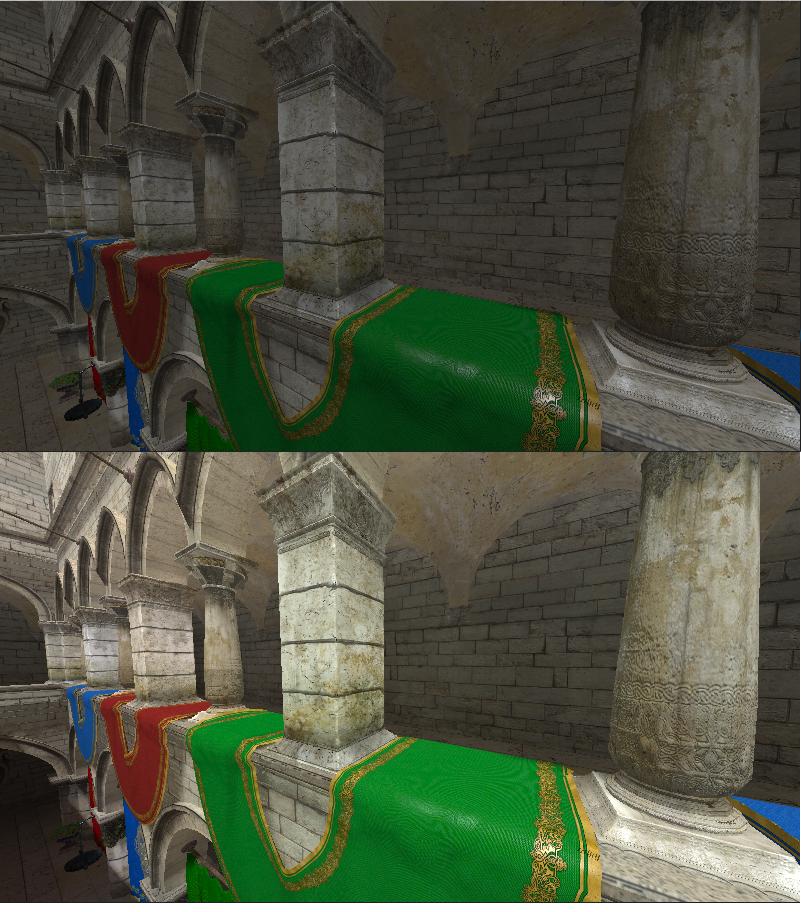 When looking up the cells during the lighting stage, trilinear interpolation (using hardware texture filters) is used to smoothly interpolate data between the center of a cell, its neighboring cells, and the actual looked up texture coordinate. Essentially, this interpolation mimics the propagation of the lighting information at the center of a cell to the concrete pixels around the center where the information is looked up. This is required because otherwise the lighting would look very rough and ugly. However, since trilinear interpolation doesn't take into account the direction of light propagation of lighting information encoded in a cell (remember, it's in spherical harmonics), the light can be incorrectly propagated to the looked up pixel. For example, if the radiance encoded in the cell only propagates towards (1,0,0) ("the right"), everything that's to the left of the center of the cell should receive less light than what is stored at the center, and everything that's to the right should receive more, but trilinear interpolation does not take that into account.

This causes light bleeding incorrectly trough walls when the cell sizes in the grid are big compared to the surfaces in the scene (this is necessary because you need big cells to propagate light far into the scene with as few propagation iterations as possible). This is what it looks like: 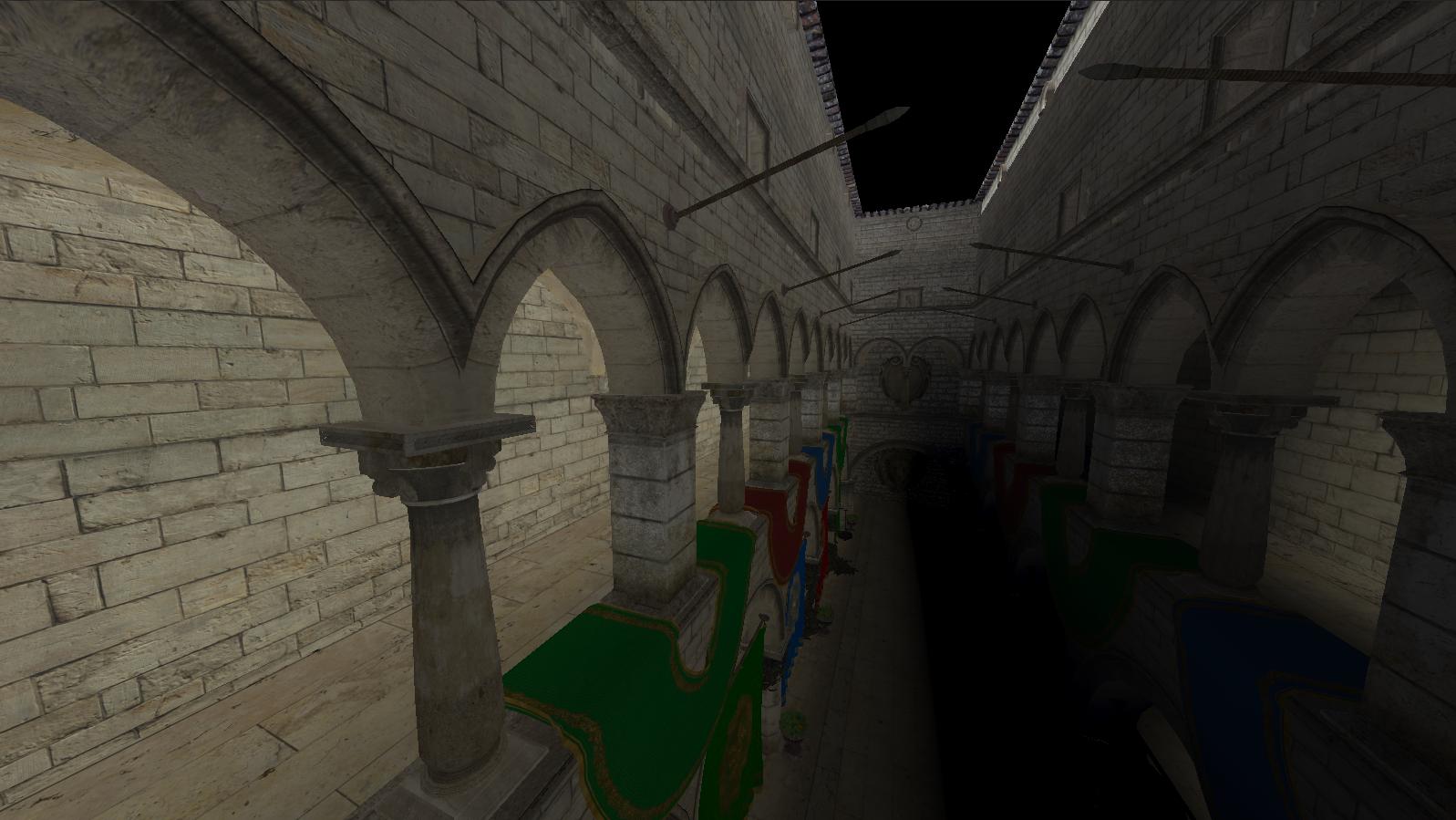 As you can see (from the shadow outlines at the top right), the scene is lit by a directional light source somewhere above the scene to the top left. And since there is only one cell separating the outside of the atrium and the inside, the light bleeds through and the wall to the left is incorrectly illuminated.

The author suggests a form of manual anisotropic filtering to fix this. He gives a radiance gradient (I'm assuming of the SH coefficients sampled from the current cell) towards direction of the surface normal n as:

And how is that gradient then used to change how the sampled lighting from the cell is applied to the surfaces, exactly? The author just writes "comparing the radiance directional derivative with the actual radiance direction", but this is pretty vague.

The central difference has been introduced by an AMD paper when they did some demo with crystal flying in a tunel, from memory.

The c function doesnt have to be something precise, just an idea of, e.g, radiance, so just evaluate the SH using your current normal.

Then what you do with that, is that you down-tone, using an empirical factor, the radiance using this differential. But only do you downtone if the differential implies the light flow goes away from your current normal.

Basically the idea is to empirically detect the fact that if you go in the direction opposed to the normal of your wall, the light flow is diminishing slowly, because it propagages in the air (on the other side). But if you probe a bit in front of your normal, you will notice a sudden drop of flux, it means the cell you are sampling now is actually a leak.

I have found that it works in 70% of the cases, but if applied carelessly, it can creates very strange black holes effects, or hue shifts (pink, green...) on very dark areas that contains a light leak otherwize. This is because you have 3 LPV for each colors, the central difference tends to give different results. If you are capable, try to use the greyscale lightness to evaluate the central difference dampner, and use a common reduction factor to all color channels later.

Without this hack, normally you should not get much radiance at all anyway, because the normal you use to evaluate the SH is opposed to the flux direction. Howver as you notice, the 2-bands SH used in LPV are not enough in fact, and have a strong DC component that gives this powerful leaks. This is why LPV is impractical for geometries that are not tightly controlled by an LPV-aware artist, that will give every wall a minimal thickness to reduce leaks.

Also some companies (like square enix) use manually designed blocker walls to kill the leaks, like the geometry volume should give you. (the geometry volume helps to reduce the leaks, but the RSM retroprojection to voxelize the scene is too partial in most cases and creates aliasing at the LPV cell level which gives the leaks an even worse look because they vary intensity weirdly).

You can only suck it down and try to mitigate the problems by giving LPV a less-strong final word on the final indirect light, use a constant term with a weight (0.5 ?) and the LPV could contribute to the remaining 0.5 of the indirect light. Also try to implement the geometry volume, it will diminish the problem. And finally the central difference.

Not the answer you're looking for? Browse other questions tagged global-illumination or ask your own question.

1
How do I render light propagation volume without aliasing?