Determining which edge of a box was clicked in Unity

How would I go about figuring out which edge of a box is clicked in Unity? 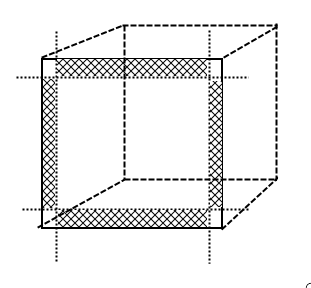 Quick image I created, colored in boxes represent edges on a face I would like to check for.

The current solution I have is half working. I create a raycast, check if it collided with a box, get the normal from the hit (to determine which side it collided with) & check if the point meets the criteria for X, Y, or Z (in the buffer zone, as outlined in the image). For example, if the raycast intersects the forward face I check that the point is inside one of the X buffers and not in one of the y buffers. 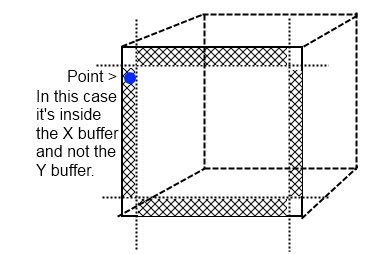 Currently only 2 sides on the forward / backward face work, as shown below 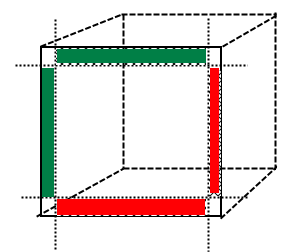 The buffer is equal to .15 if anyone is interested in that as well.

Any ideas? Am I approaching this wrong or is there a bug in my code I'm not seeing?

As Twyla mentioned, RaycastHit.point returns the world-space position. In order to get the local position of the hit point on the box, you have to transform the hit point with the inverse transformation of the box. You can do this by using hit.transform.InverseTransformPoint(hit.point), where hit is the RaycastHit object.

Note: the way your code looks now, it seems like your box has it's center at localScale / 2. If this is not the case, and the box is centered around (0, 0, 0), you have to check if the components lie between -localScale.xyz / 2 + edgeWidth and localScale.xyz / 2 - edgeWidth.

hit.point returns the world-space position of where RaycastHit impacted the collider. Compare that against the cube's position in world-space to produce a Vector3 relative to the cube's origin, then refactor for the cube's current orientation.

Whichever component of the Vector3 has the greatest magnitude indicates which side of the cube was hit.

You could do as above then normalize the Vector3. Check for absolute values above the threshold (probably around 0.85) for the two non-face axes to see if it's a valid trigger (to determine top/bottom or left/right), then +/- to single it out.

Just my own feeble attempt at the code...

(I'm sure someone more proficient could give better details, but that's how I would approach the problem.)

2
Knowing when an ad was clicked
0
How do I raycast to detect which hexagonal tile was clicked?
1
How do I know what button was clicked? (Unity)
0
Unity, Which side of Collider2D was hit by raycast?
0
Finding out which Panel was clicked in function
0
Trying to make a button in Unity which spawns a character each time it's clicked
0
Determine which button was pressed
1
Pressing two buttons on Android with same thumb touch. UI Event Triggers not working. Workaround found
0
Why RaycastAll misses some objects?