I have a BIG problem!! I want to make something like old space shooter games like “Asteroids”, where the ship, when going out of the screen, is reappearing at the other side. For example, when the ship go out at the top of the screen, it come back at the bottom. But in my game, there’s a camera following the player, showing only a quarter of the world, and I want to simulate an infinite world this way! Here’s a picture showing what I mean : 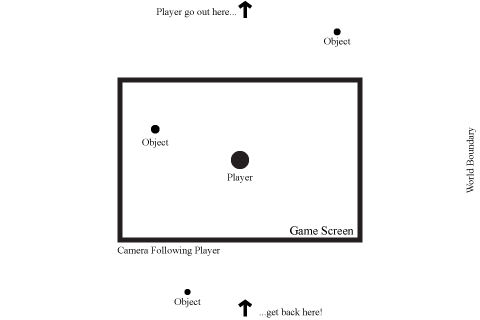 What I thought doing was simulate the scroll by only moving game objects, stored in an array, but not the player, and calculating at every frame if the objects are out of the world boundary and re-adding them at the other end of the world (i.e going out at the left would add it back at the right).

Do you guys have any idea of how doing it? Like, any tutorial on the web or just the right words to explain what I mean so I could do a bright research on google (I’m french, so I had a really hard time writing that question)!

Thank you in advance!

Browse other questions tagged cocos2d-iphone cocos2d scrolling or ask your own question.