How can I simulate a limited (256) color palette in OpenGL?

On Twitter, I found this screenshot of a game in development: 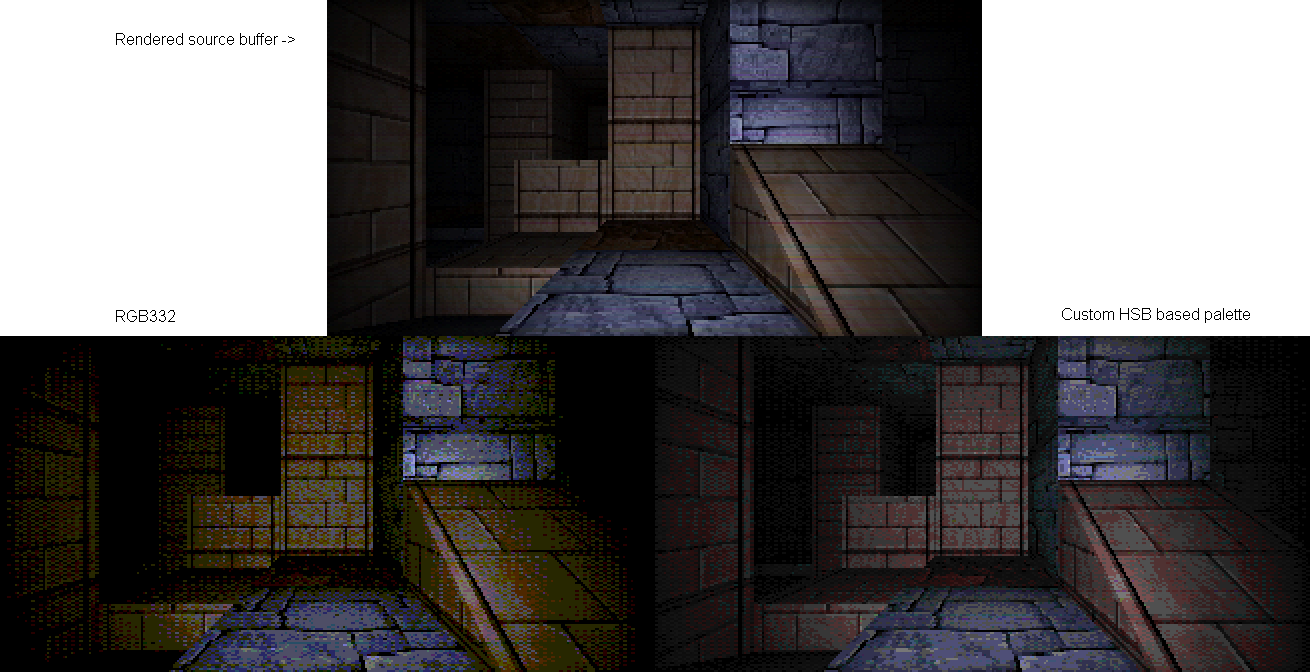 The image on top seems to be without any color limitation. But the two other pictures at the bottom have a 256 color palette.

I want to achieve a similar effect in my game (I am using OpenGL). How can I do so?

I am the creator of that image.

The image on the right is rendered using a color look-up texture. In the final GLSL shader, I apply the dither, then convert the RGB values into integers in the range 0<=x<40, combine them into a single index, then look up the resulting color value in this image:

The lowest row is the raw palette.

The image to the left is made purely in the shader by downsampling the red and green channels to 8 values, and the blue channel to 4 values after applying the dither, resulting in RGB332. I've also played around with 7 red, 9 green and 4 blue shades, resulting in only 252 colors, but with a bigger emphasis on green, which the human eye is the most sensitive to.

You could use a color grading lookup table in a postprocessing step as described here and probably here.

After you've implemented this, all you'll have to do is make a screenshot, overlay the lookup texture ontop of it, then edit it in arbitrary graphics software until you like it - and then retrieve the modified lookup texture again. This may or may not include reducing the retrieved lookup table to a subset of colors.

When loading the lookup texture with color limitation in mind, just make sure to disable all filtering, so it won't produce additional colors.

Not the answer you're looking for? Browse other questions tagged opengl webgl or ask your own question.

37
Creating a retro-style palette swapping effect in OpenGL
2
How can I create a pixellated, limited-palette appearance in modern OpenGL?

7
Rendering 2d sprites into a 3d world?
13
Trying to understand light on Opengl, how to simulate a realistic sun light?
43
How can I reduce aliasing in my outline glow effect?
0
Dynamic Sprite Scaling in SDL?
37
Creating a retro-style palette swapping effect in OpenGL
2
OpenGL - How to draw a transition of two textures on one quad?
1
Vertex shader in OpenGL/GLSL - transformation of the interior of a textured quad
0
Keep 2d GUI shape through rotation
1
How to adapt a webgl shader using mouse position to have symmetrical behaviour
1
OpenGL additive vertex color mode