How do Raymarch shaders work?

I have been looking at shaders found here shadertoy.com and most of the cool ones have noise and raymarch in common. I do not understand the source code at all but I really want to. How do these shaders work and how does the raymarch algorithm work? I've searched all over and can't find anything on the topic.

It's probably easiest to understand by contrast with raytracing.

To render a primitive with raytracing, you need a function that, given the primitive and input ray, tells you exactly where that ray hits the primitive. Then you can test the ray against all relevant primitives, and pick the closest intersection.

This means potentially a lot of non-local data traversal as you search through all the candidate primitives in the scene, and running multiple different intersection tests depending on the primitive - a varied workload that historically made this almost exclusive to CPUs. It's only recently that specialized hardware and APIs have made such techniques more tractable on GPUs.

With raymarching, you don't always have such a simple ray intersection function. Given a point on the ray, you can estimate how close the point is to the surface, but you don't know exactly how far you need to extend that ray to hit the surface. 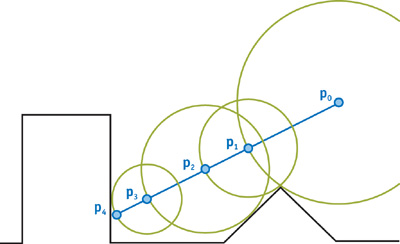 There's a great interactive demo by paniq you can play with here - click and drag in the canvas to change the ray direction.

Because each ray is independent and uses (generally) only local information at each step, it's ripe for parallelizing on GPUs - even using conventional fragment shaders rather than sophisticated compute shaders or specialized raytracing hardware. Often, only two triangles will be drawn on the screen. After rasterizing these, each pixel passed to the fragment shader represents a single ray. The fragment shader marches that ray until it reaches the surface, returning the result (often just the depth value for texturing & shading in a separate full-screen pass).

The exact steps depend a lot on the particular effect you're trying to achieve. Raymarching techniques are used with...

Raymarching is also used with blending at each step (often using fixed steps instead of estimating a distance each time) for rendering volumetric translucency, as in this example from Wikipedia.

This has become a popular way to render detailed clouds in realtime.

Even Interior Mapping, a way of simulating interior room detail behind building windows, could be considered a form of raymarching, where the ray is stepped from the point it enters the window to the closest wall, floor/ceiling, or furniture plane.

If there's a specific type of raymarching effect you're interested in, you can probably get more detailed answers by asking a new question with specific examples. As a family, the technique is too diverse to cover everything in one short answer. ;) I hope this gives you a framework for understanding what's happening under the hood in these shaders.

Not the answer you're looking for? Browse other questions tagged shaders algorithm glsl raymarching .

13
What is the difference between PBR and SSR?
5
Are there viable alternatives to polygons for creating 3D worlds?
1
How do you compute the tangent space vectors with normals given in the mesh?
0
What is the purpose of tangent and bitangent vertex attributes?

8
Overview/showcase of shader techniques/uses for games
28
Simple noise generation
17
OpenGL: Where shoud I place shaders?
5
How can I determine the extreme color values in a texture?
23
What are Hull, Domain and Geometry shaders used for?
1
How do multiple shaders in a DirectX Engine work?