Rotating one object to track another in worldspace 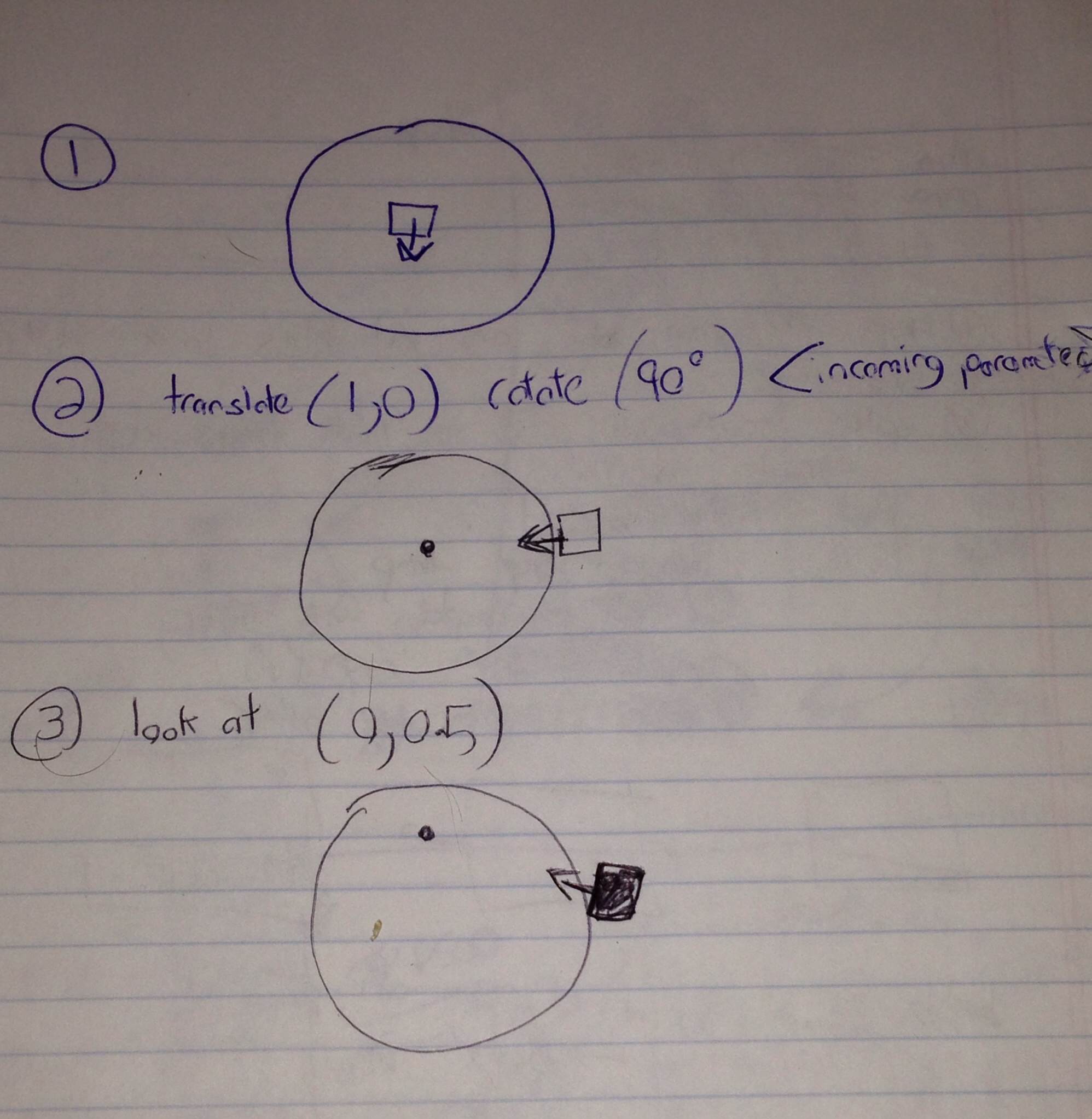 This should be pretty straightforward, but its been awhile and my brain has officially turned off for the holidays :-) To keep things simple, lets assume everything is in 2D space.

I've got a large circle, who's centre will be the origin (0,0). Now lets say I've got Object A, who is sitting inside this circle at the origin, and is facing a direction (0,1), the positive y direction. Circumference of the circle shouldn't matter for what I'm trying to do. Now let's say I have two incoming parameters (which I have no control over). One of these parameters is a rotation (in Radians), and the other is a translation. If I apply this rotation to Object A while it's in the centre of the circle, followed by the translation, the object will now be on the outside of the circle but its direction will be facing the origin. In other words, the incoming parameters will translate the object to be outside but facing the centre of the circle, where it was originally inside and facing the positive y direction.

Here's where I'm stuck: If I also have a random point inside the same circle, and I want Object A to be translated to the exact same position it would normally be translated to (outside the circle) from those two incoming parameters, but facing the direction of this point instead (which could be anywhere inside the circle), what's the most efficient combination of operations to apply to it to accomplish this, assuming object A always starts in the origin, and this is the only information I have (the translation/rotation parameters, and the position of the point I wish to track). Assume the point can move around anywhere inside the circle, and the object will remain outside in the exact same position but its direction will "track" the point regardless of where it is.

UPDATE for clarification: Sometimes a picture is worth a thousand words ;-) See attached image... #1 is where the object starts at. #2 is what would happen if I apply the incoming translation and rotation parameters. #3 is what I'm trying to achieve. I do know that the "random" point is located at (0, 0.5) in this example. How do I get from #1 to #3 in the least amount of steps.

After re-positioning the object based on the incoming parameters, I think you can do something like this:

or, if you can only set incremental roations, then the second line becomes something like...

You might need to flip a sign or adjust the angle you get from atan2 to work with your rotation notation (since you don't specify what libraries or coordinate systems you're using), but I think it can be basically as simple as this.

Just remember to do those two steps anytime objectA or its targetPoint moves after this.

I believe this is what you're after.

Note that it makes more sense to pass in the distance from the center of the circle you wish object A to be placed instead of this translation vector, as it appears the rotation is determining how far around the circle objectA should be placed.

This function assumes it is a method of object A.

This is similar to DMGregory's answer but I wanted to show a more complete answer to resolve any ambiguity.

Not the answer you're looking for? Browse other questions tagged mathematics rendering or ask your own question.

8
Rotating a vector by another vector in shader
14
Get angle in radians given a point on a circle
3
Precalculate the position of a rotating Aircraft
2
Offset during zooming to keep object within boundries
2
Rotating an object towards a target on the Y axis
1
How to get the center position for AABB of rotated mesh right?
0
how do I move an object based on rotation of another object?
0
Rotating a parent rectangle to align child with target
0
THREE.JS - How to know the shortest rotation direction an object must do to look at other?
0
Calculating unit wheeling