How do I create a color picker with variable hue and saturation?

I am trying to create a Color Picker similar to that of MS Paint.

Unfortunately, I can't figure out the algorithm for saturation.

This is what my current algorithm creates. Anytime I try to perform a saturated effect going down on the Y axis, it just makes everything after the first line completely red or black.

If not going with HSL or a similar method, and staying with RGB, it helps to understand the relationship.

This same process is true for any hue. Green is simply the G value being higher than the R and B values, yellow is the combination of R and G values overwhelming the B.

If you want to have a colour-picker with Hue on one axis and Saturation on the other, it might be good to think of your colours in terms of the Hue-Saturation-Value (HSV) or Hue-Saturation-Lightness (HSL) colourspaces instead of Red-Green-Blue (RGB).

There's no magic going on here -- HSL and HSV are just another another way of thinking about colour.

Here's what that looks like in GIMP's colour picker: 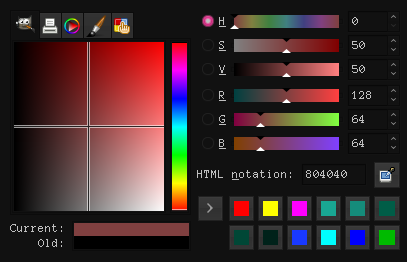 The values for H, S and V on the right there are a little confusing because GIMP treats Hue as between 0 and 360 and Saturation and Value between 0 and 100, but the principle is the same. 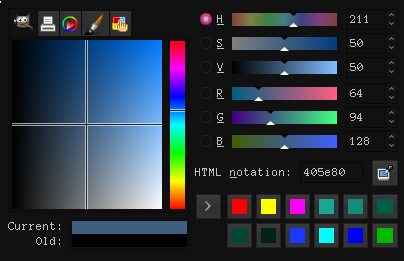 Note how the S and V sliders are in the same place. I've only changed the Hue value. You could very easily write some code that steps through the different Hues, as well as through different Saturations to create a 2-dimensional grid of HSL values that represent the colour picker you want.

Note that the RGB sliders have changed a lot! GIMP automatically calculates what the RGB equivalent of an HSV colour is.

You'll probably want to convert your HSV colours to RGB equivalents so your renderer can handle them.

This conversion is not too complicated. In fact, there are some really good answers on StackOverflow, along with code you can easily adapt to your language.

However, if you're curious, the general idea behind the conversion (and perhaps a nice analogy to make the idea of a "colourspace" clearer) is this: The same way you can think of RGB as a cube with R, G and B each along one axis of it...

... you can think of the HSV colourspace as a cylinder: 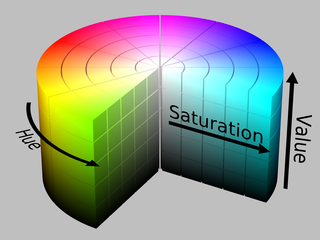 The conversion essentially stretches and bends that cylinder to match with the cube.

The solution is simple: http://richnewman.wordpress.com/about/code-listings-and-diagrams/hslcolor-class/

1) Add the HSLColor class from the above link.

And here is the resulting image, which you are freely allowed to use for anything you want. You do not even need to use the ColorWheel class, but simply use this image and get the pixel at the mouse position to dye your gameobjects as you see fit. 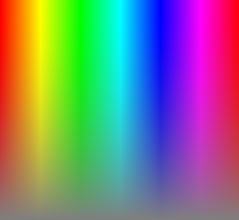 To change the brightness (which would be on the slider) use hslColor.Luminosity in the equation, and it would probably be best to use the ColorWheel class instead of the image, unless you feel confident adjusting the image brightness based on a double integer attached to the slider. A good Color Picker GUI which includes both the image, mouse cursor, and slider with just a few lines of code would be TGUI. Obviously you would want to replace the default image with the ColorWheel class if you were using it, or the ColorWheel image I just provided.

All free to be used by anyone as they see fit.

Not the answer you're looking for? Browse other questions tagged c# sfml color .

1
how to calculate sky color hue in a specific way?
1
Sprite collision with color?
1
GLSL: Vertex attribute to int
0
XNA Distortion Shader problem
0
How can I duplicate this color/hue shifting effect in C#?
0
How to create a color grading LUT for Unity URP?
1
How do I make a rainbow hue shift over time on text?