Masking away part of image with mesh

I need to remove a section of an image using a 2D mesh. Since the image is destructible (artillery game style), it would be helpful to shrink the image in memory afterward. The portion in the blue section should be kept, the portion in red is within the mesh and should be removed. Note that the image is rotated as well. 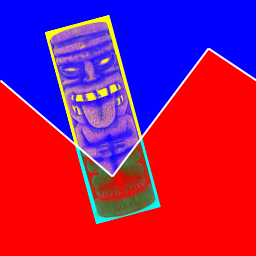 Here's my possibly naive way of doing it:

I. Create a render target the same size as the image that will be partially erased (should be transparent). I'll call this render target brush.

II. Render the polygon, offset relative to the image's origin and size, in white to brush, here shown with checkers and border to indicate transparent section.

V. I came up with the following blend state in XNA to use for the next step

VI. Use that blend mode to draw brush to canvas, again shown with checkers to indicate the transparent area.

Optional: Scan from the polygon's center toward the far edge of the image to find the new edge of the pixels, then trace the edge (eg using marching squares) to adjust its bounding box.

Not the answer you're looking for? Browse other questions tagged xna masking or ask your own question.

1
Problems with 3D rotation when creating a 3D skeleton
3
How to prevent 2D camera rotation if it would violate the bounds of the camera?
6
3D terrain map with hexagon grids
1
Trouble with the State of things in XNA
0
Creating a gradient for a texture - Why is the color becoming dark on one side?
1
How can I chain together Stencil tests from the same re-occurring routine, but keep the tests separate?
2
OpenGL Positional 2D Texture Masking
0
Transparency temporarily lost from a rendertarget when drawn to for one frame
0
Sprite masking with multiple, non-equally dimensioned textures in XNA