I guess it works, but this happens: 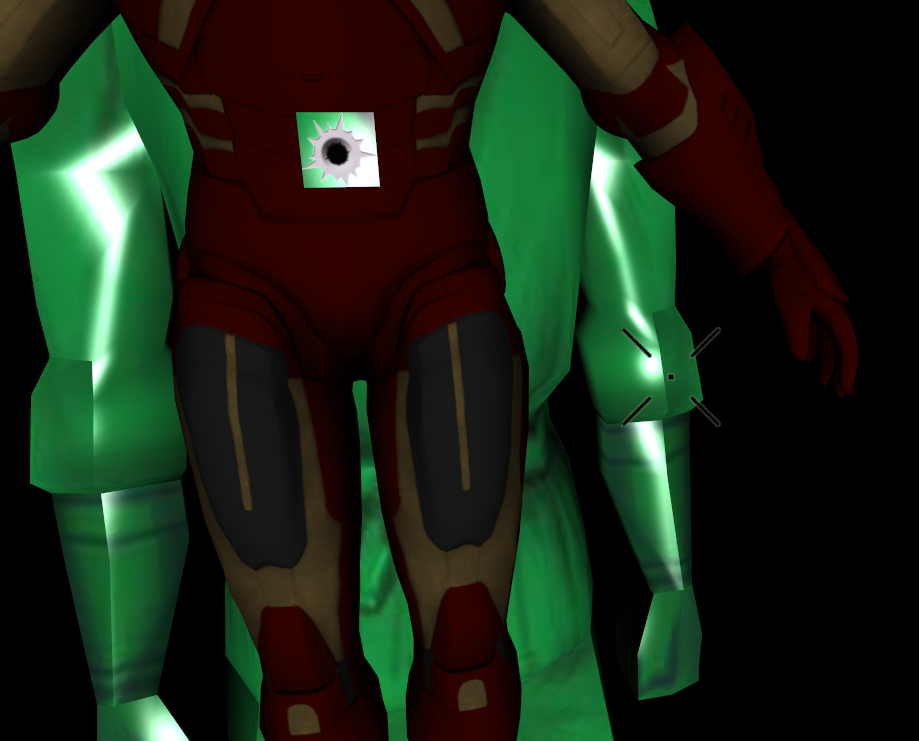 Basically, instead of the transparent part of the image (bullet hole) showing iron man’s (first model) red armor, it shows the ninja’s green clothing, which is in the same position but behind the iron man model. This happens even when the geometry is in front (between the camera and the both models) of the models, so idk what’s happening. Any help is appreciated!

Queue buckets are not deprecated and are absolutely intended to solve this very problem.

Objects are rendered in the scene in bucket order, i.e. Opaque is rendered then later on Transparent - there are other buckets too.

Within the bucket they are sorted based on a geometry comparator. For the opaque bucket this draws near to far, for the transparent bucket it draws far to near.

This is to reduce overdraw on opaque objects (so after you draw a large object in the foreground you don't also both drawing the pixels for all the small objects behind it). For transparent objects though you must draw the furthest away ones first so they appear behind the ones nearby and to allow transparent objects to be drawn as well as possible. Unfortunately it's impossible to sort objects correctly in all cases (for example overlapping objects) but the engine will try.

You also have alpha discard etc available for transparent objects to prevent them writing to the depth buffer in transparent areas to help improve this.

So putting the object in the transparent bucket means that all the opaque objects are drawn first. Only afterwards is your bullet hole drawn, so this then gives the result you are looking for.

I'm not sure why the green man was still being drawn as I'd expect him to be drawn last, maybe the extents of the model just pushed in front of the bullet hole or something though.

To solve the problem in this case you can first render all opaque models and then all translucent models. This gives correct results if there are no overlapping translucent polygons. If there are, the problem gets a lot harder. See Rendering order and What is the order-less rendering technique that allows partial transparency?

seems to have solved it, though I don't really know why. Maybe SceneProcessor is messing with my render order?

Not the answer you're looking for? Browse other questions tagged java jmonkeyengine or ask your own question.

6
How to detect a touch on transparent area of an image in a (libgdx) stage?
1
How do I draw a line using jme3.scene.shape.Line in JMonkeyEngine 3.0?
0
Transparent JPanel, Canvas background in JFrame
1
LWJGL exception in JME3-JFX!
2
Cut rest of image behind object (like POV)
0
Limiting GIF animation rate to its frame delay in JME3
0
LWJGL/OpenGL - Textured squares not displayed behind other transparent textured squares
0
JME3 Fragment/Shader not compiling