I have a 2D tile-based lighting system which is drawn onto a Render Target. I am also drawing a background which involves mountains, sun/moon, and clouds. There is also the unlit game; blocks, character, etc.

Here is the order in which everything is drawn:

The problem is that the LIGHTING is covering up the BACKGROUND when it's dark: 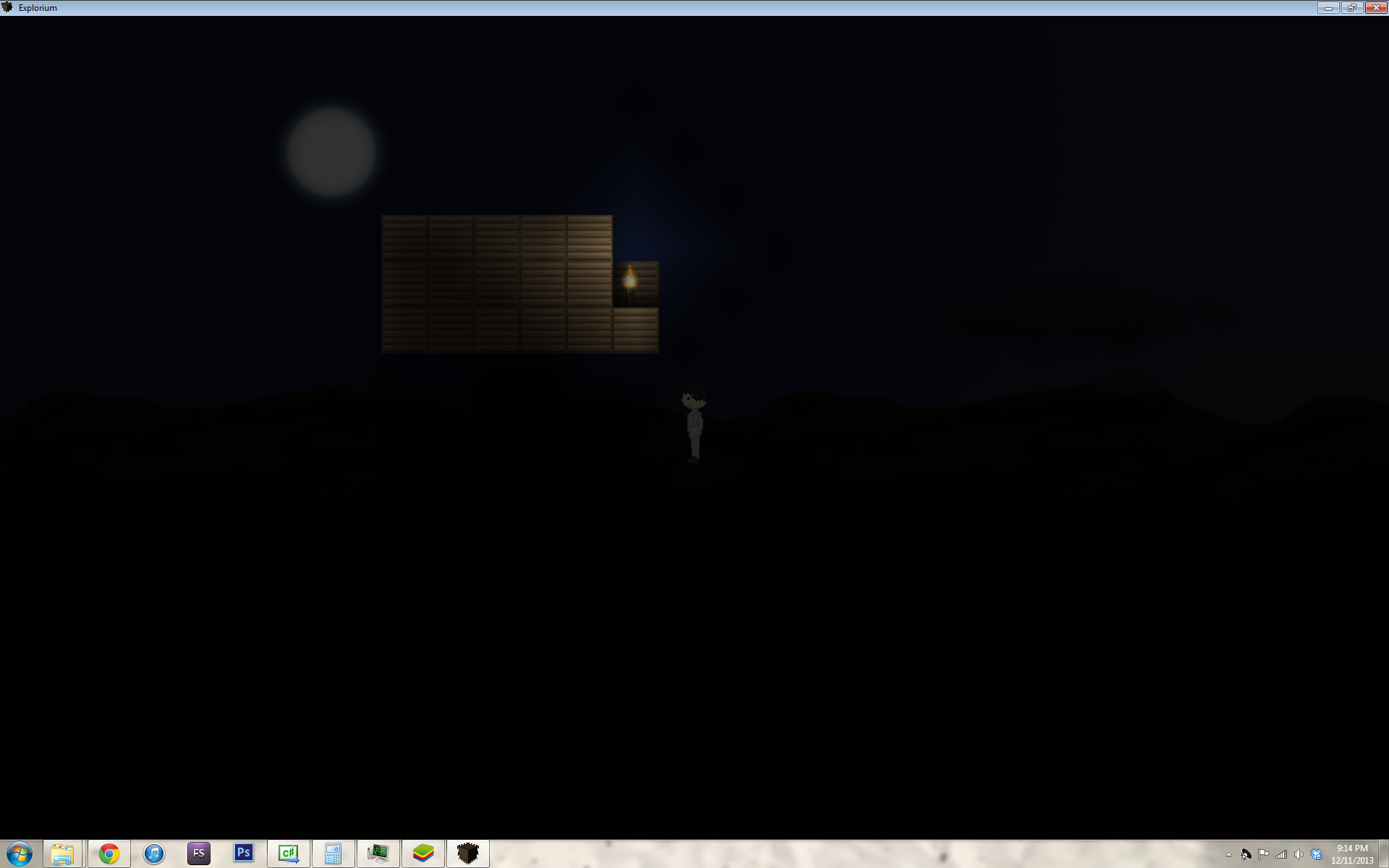 Although it's perfectly fine in the day because the light is full: 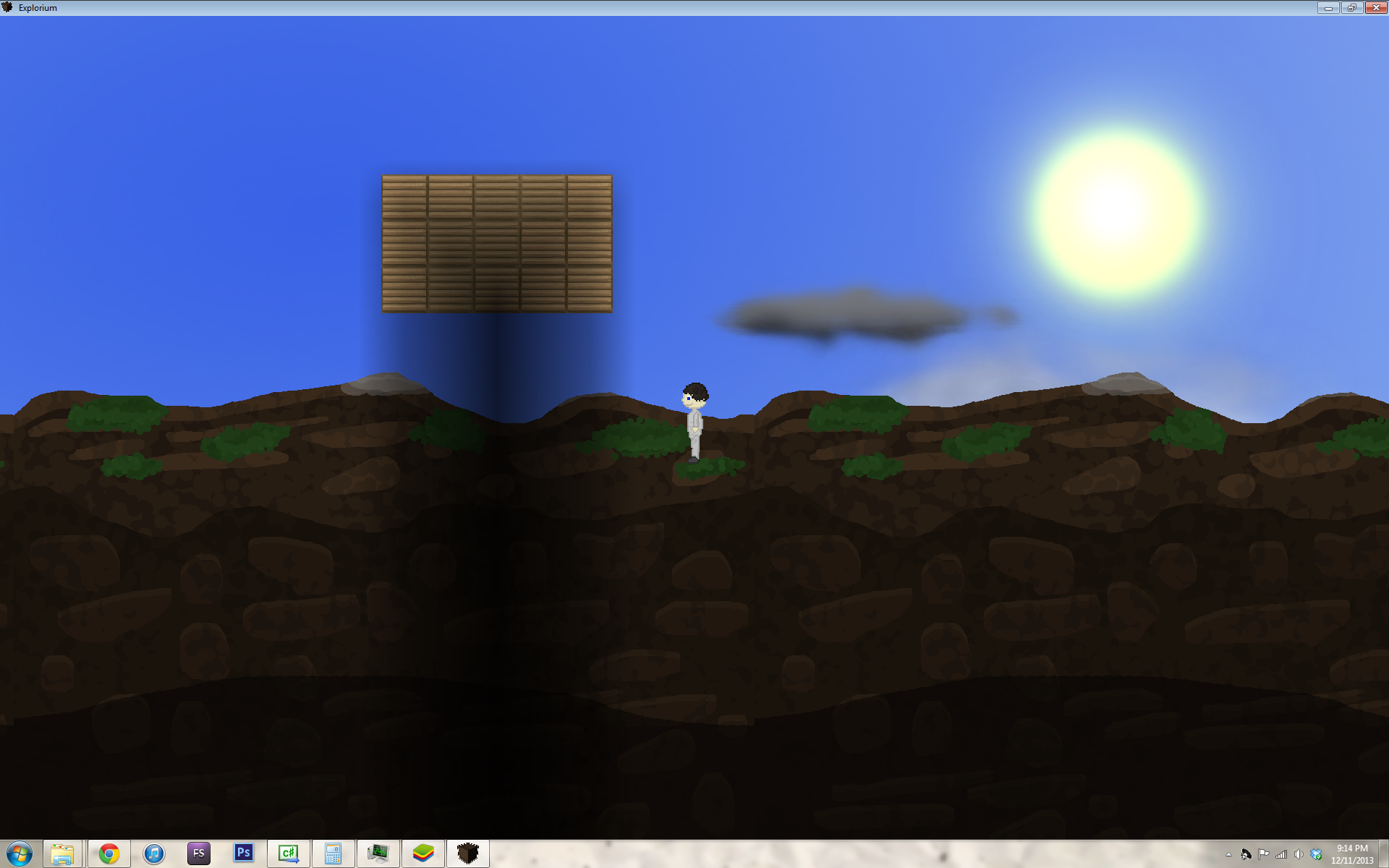 You might ask, well, why don't you just blend each block, not drawing the lighting on a RenderTarget?

How about not drawing a square of light in empty spaces?

The light blurs onto any adjacent blocks, and not all objects in my game affected by lighting are square, so they would look like a sprite with a blurry square on top of it.

Light NOT being drawn in empty spaces: 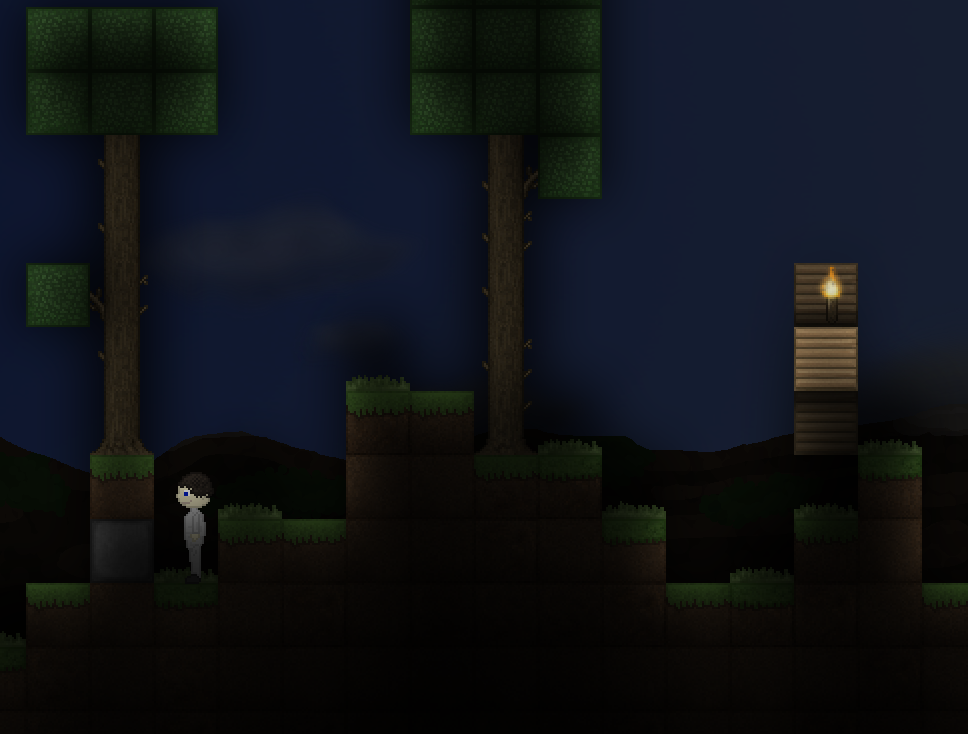 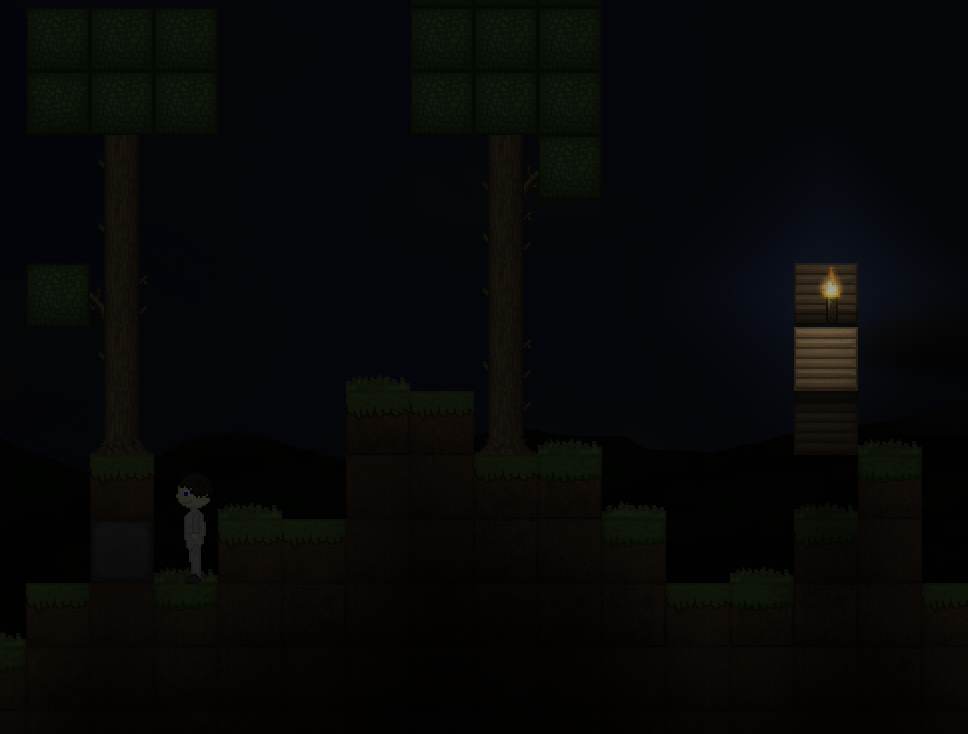 Is there any way to keep the background visible, or something else that would help my predicament?

As you can see the background blocks, due to the effect, are not darkened like they should be. The FPS here is ~15 as opposed the the steady 60 FPS it runs at without the stencil method. Also the character is somehow not being drawn correctly. 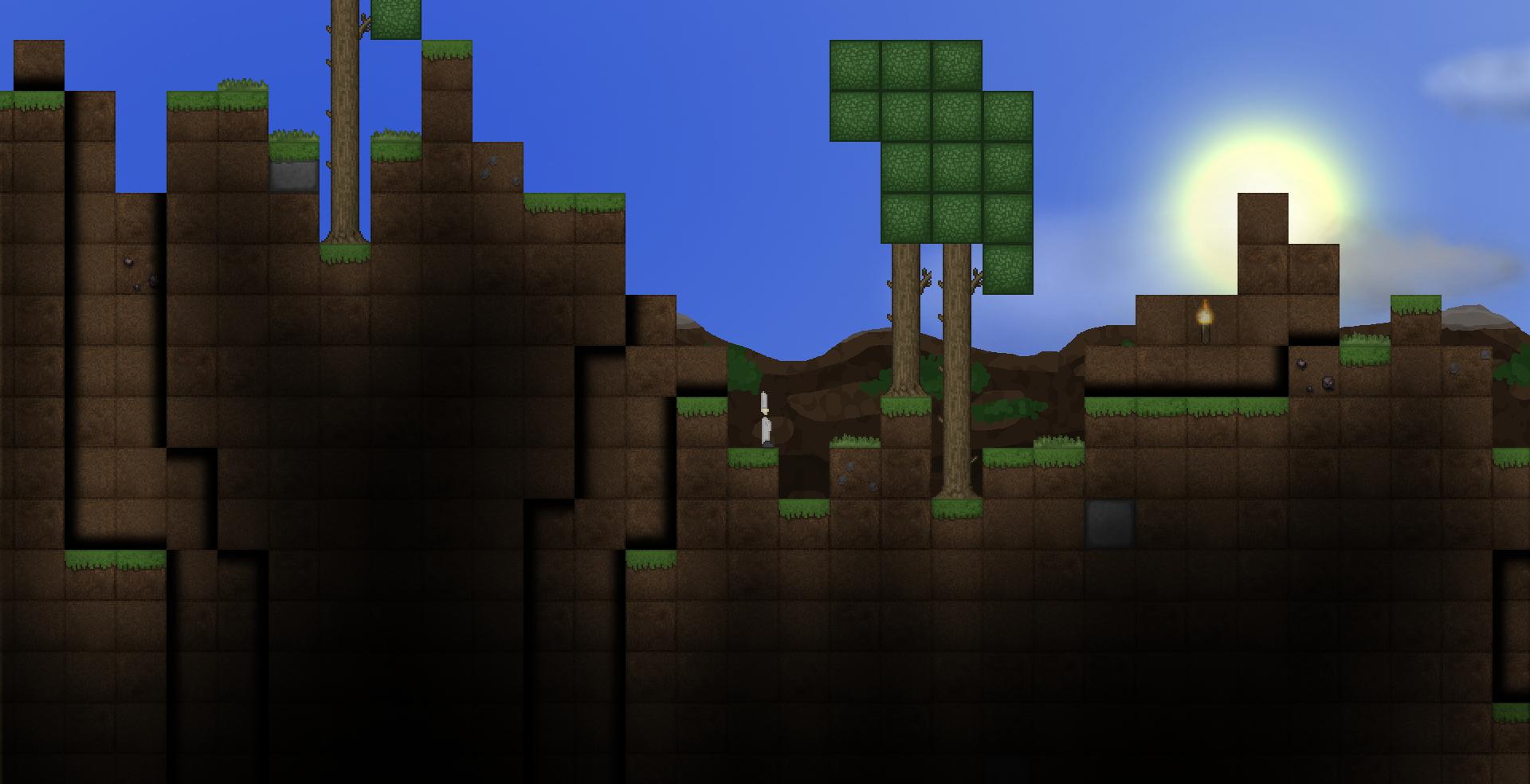 It does in fact work though despite the more than annoying lag. 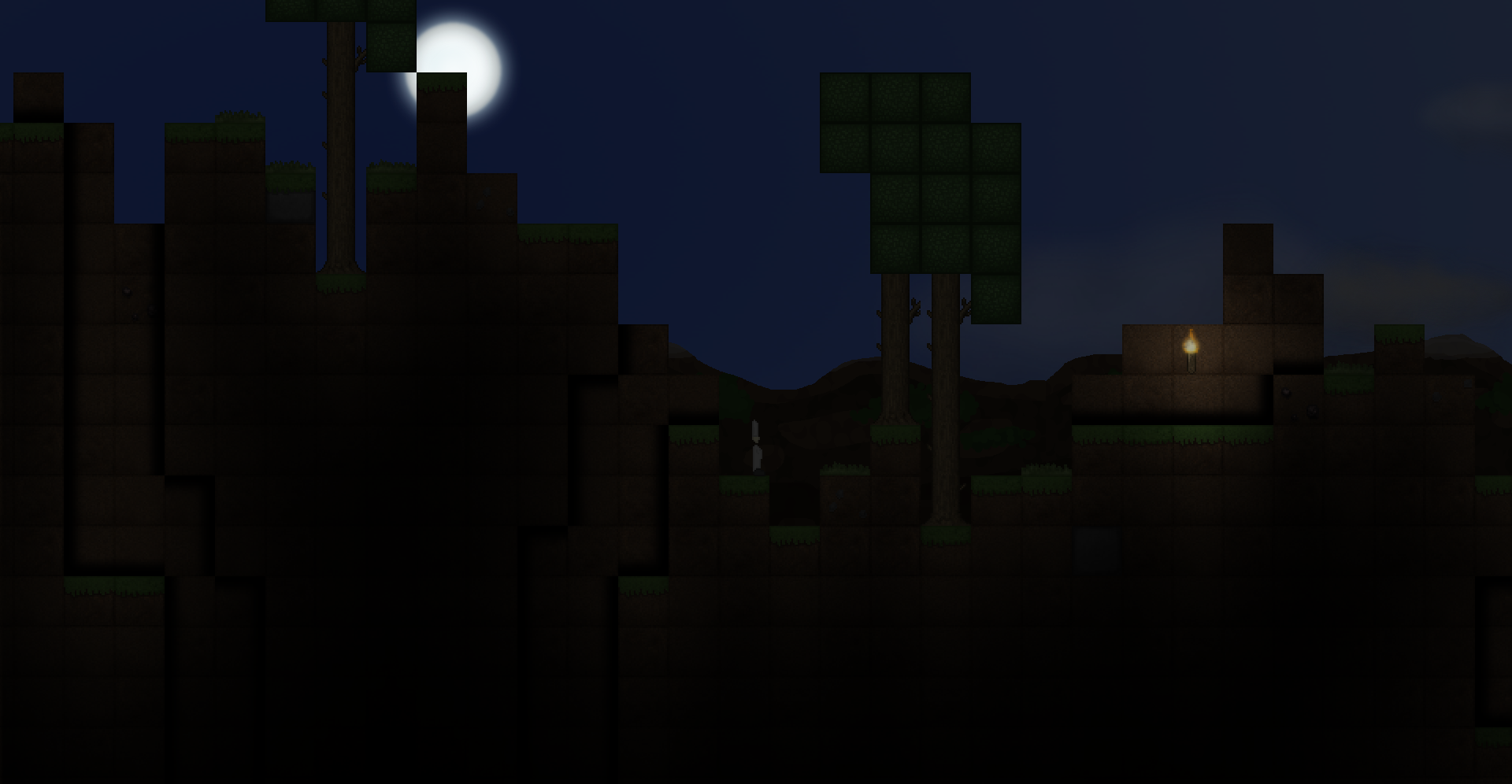 The issue seems to be that you are applying lighting to an object which should not be affected by it. It makes no logical sense that something in the local scene should be able to affect the sky, like the shadows in your sample do during the day. I think this doesn't make logical sense but perhaps it does make aesthetic sense.

If I have understood correctly what you want, then you should consider the following method:-

At the end your draw method should resemble (code taken from here);

In a comment it was mentioned that the stencil buffer approach was being slow. This shouldn't be the case if generated in the same pass as rendering the main game objects as it should add very little overhead. However, there may be another method in this particular case.

This should mean that when you blend using alpha blending at the end of your rendering pass the lighting buffer will have transparent areas where we don't want illumination applied on the screen.

Note: I may have the 1 and 0 round the wrong way. I get this wrong most of the time and wrote this assuming that 1 means "completely transparent".

Not the answer you're looking for? Browse other questions tagged xna c# 2d lighting .