How to set speed of circular motion

Just to clarify, the issue I have at the moment is how I specify a time (in seconds) for a complete revolution to occur. My delta is fixed and is 1/ticks per second (1/60). As you can see with my linear sprite movement, I have a 'time' variable which is where I specify (in seconds) how long the sprite should take to travel the length (or height) of the screen. I'm looking at how I do this for circular movement.

See at end of question.

When moving my sprites along a straight path, I'm using delta so I can get the same rate of relative motion on all devices like so:

So, when I need to move the sprite, I simply do the following:

Now, I need to have a sprite move along a circular path. So far, I have a test up and running which directly acts on the 'screen' coordinates of the sprite directly like so:

Now, the above does work, but the sprite completes it's circular path way too quickly (it's doing approximately 1 revolution per second).

So my question is:

Would really appreciate some pointers. 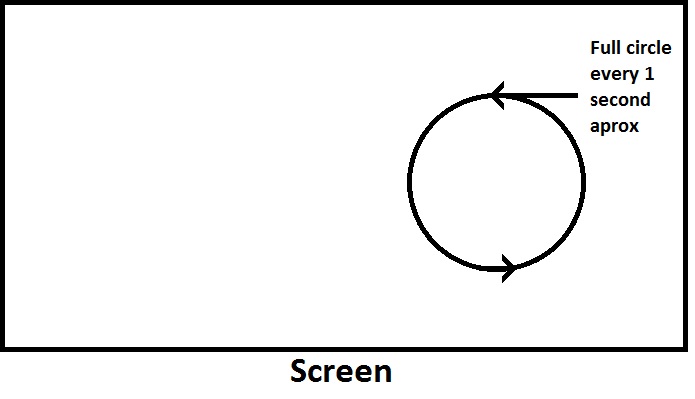 If I put the following: 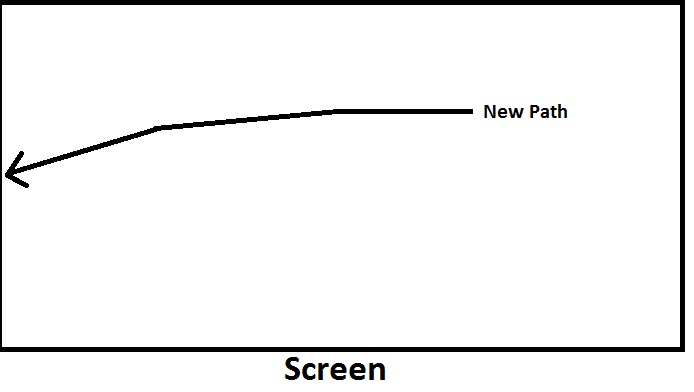 Math's trig functions use radian so multiply the angle by Math.PI/180 before passing as parameter

if you want to rotate along a specific point (px, py) then you can do the following

You are using += to modify the position directly from the angle. Effectively, you aren't updating the position along an arc, you are updating the direction of movement. So when you slow it down, all you get is a direction that changes more slowly, which means a bigger circle.

To use a radial velocity, you would need the center of rotation. But that seems like a cumbersome extra bit of data to store. It would be simpler to store and update speed separately from direction. Then you could always update the position according to a single frame's instantaneous velocity, rather than calculating some offset based on a radius, then calculating the angle traverse, turning that back into a position, etc.

Now if you increase the angular speed, the object will turn in a smaller radius. It would still be possible to calculate the radius of the turn. The math will be very simple, if you use radians. :)

The solution I used for anyone who comes across this problem was this:

To rotate the sprite

I've tested this at various screen resolutions and time settings and the sprite rotates according to the time variable (i.e. specify 10 seconds and it will take 10 seconds for 1 complete revolution to occur).

Changes in the time setting will not alter the radius of the orbit's path and the opposite is also true.

If you want to set the initial angle of the object around the orbit-path, then simply specify in radians

Forget approx. You can get the thing to move in 1 circle exactly 1 time per sec.

Your framerate is kinda irrelevant to the sinuosoid. If you are using a framerate of 60 fps, just fix your timestep to timeStep=1./60. Now if t represents "clocktime", the sinusoid will progress at freq cycles per second. The sinusoid doesn't care that your t is discrete.

Also, don't accumulate your sin offset. What you want to do is specify a centroid position, and the sin/cos values are the offsets that get applied on each frame.

Not the answer you're looking for? Browse other questions tagged java animation sprites rotation .

0
Android Game Development problem with Speed = Distance / Time
3
How do you set the movement speed of a sprite?
1
How to handle sprite speed when objects move using Box2d?
3
How to motion capture animations?
3
Collision detection for sloping tiles
1
Getting sprites to move exactly the same on different devices
2
LibGdx sprite rotation vs Box2D physics rotation problem
5
How to disable animation root motion
0
How to set the runtime of an animation based on attack speed?