How to rotate an object around world aligned axes?

I have a Vector3 which has an euler angle for each axis.

Usually, when I want to create a rotation matrix I will use functions such as D3DXMatrixRotationX passing the respective angle from my rotation vector above and multiply the matrices (ZXY) to create the overall rotation matrix which is used to form the complete object transformation matrix.

However, this method will produce a set of rotations in object space. That is, passing a vector of (90, 0, 90) into my method will create a rotation in world space effectively of (90, 90, 0).

Is there a way to always ensure each component of my rotation vector results in a rotation around the respective world space aligned axes?

This is an animation of what is currently happening - I want a way to rotate around the blue axes, not the red.

Just to note I am not looking for a solution involving Euler angles, but simply a way in which I can represent a transformation of multiple rotations around the world axes.

Based on you comments, it seems that you're storing the orientation of the object as a set of Euler angles, and in/decrementing the angles when the player rotates the object. That is, you have something like this pseudocode:

As Charles Beattie notes, because rotations don't commute, this won't work as expected unless the player rotates the object in the same order in which the eulerAnglesToMatrix() applies the rotations.

In particular, consider the following sequence of rotations:

In the naïve Euler angle representation, as implemented in the pseudocode above, these rotations will cancel out and the object will return to its original orientation. In the real world, this does not happen — if you don't believe me, grab a six-sided die or a Rubik's cube, let x = y = 90°, and try it out yourself!

The solution, as you note in your own answer, is to store the orientation of the object as a rotation matrix (or a quaternion), and update that matrix based on user input. That is, instead of the pseudocode above, you'd do something like this:

(Technically, since any rotation matrix or quaternion can be represented as a set of Euler angles, it is possible to use them to store the orientation of the object. But the physically correct rule for combining two sequential rotations, each represented as Euler angles, into a single rotation is rather complicated, and essentially amounts to converting the rotations into matrices / quaternions, multiplying them, and then converting the result back into Euler angles.)

The problem with rotations, is that, most people think of it in terms of Euler angles, since they are easy to understand.

Yet most people forget the point that Euler angles are three sequential angles. Meaning that rotation around the first axis, will make next rotation be relative to the first original rotation, hence you cannot independently rotate a vector around each of the 3 axis using Euler angles.

This directly translates to matrices when you multiply two matrices, you can think of this multiplication as transforming one matrix to the space of the other matrix.

This is meant to happen with any 3 sequential rotations even when using quaternions. 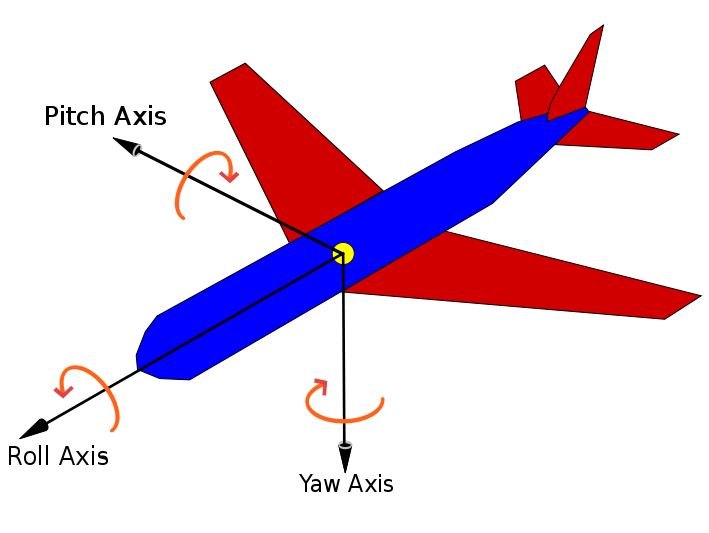 The solution for rotating a vector around 3 axis independently is to combine into a single axis and a single angle, this way you can get rid of the step where you have to do a sequential multiplication. This will effectively translate into:

My rotation matrix represents the outcome of the rotation around X and Y and Z.

rather than the Euler interpretation of

My rotation matrix represents the rotation around X then Y then Z.

To clarify this I will quote from wikipedia Euler's rotation theorem:

According to Euler's rotation theorem, any rotation or sequence of rotations of a rigid body or Coordinate system about a fixed point is equivalent to a single rotation by a given angle θ about a fixed axis (called Euler axis) that runs through the fixed point. The Euler axis is typically represented by a unit vector u→. Therefore, any rotation in three dimensions can be represented as a combination of a vector u→ and a scalar θ. Quaternions give a simple way to encode this axis–angle representation in four numbers, and to apply the corresponding rotation to a position vector representing a point relative to the origin in R3.

Now inorder to combine rotations around 3 axis, you need to get a single axis and single angles that represents the rotation around X,Y,Z. In other words you need to use an Axis/Angle or quaternion representation to get rid of the sequential rotations.

Switching a combination of rotations from object space to world space is trivial: you just have to reverse the order in which rotations are applied.

A rationale for this can be found on Wikipedia: conversion between intrinsic and extrinsic rotations.

I'll provide my solution as an answer until someone can explain why this works.

Every render I was rebuilding my quaternion using the angles stored in my rotation vector and then applying the quaternion to my final transform.

However in order to keep it around the world axes I had to retain the quaternion across all frames and only rotate objects using a difference in angle, i.e...

I think dsilva.vinicius was trying to get to this point.

You will need to store the order of the the rotations.

Store your current rotation matrix and premultiply each rotation as they come.

In addition to @concept3d answer you can use 3 extrinsic rotation matrices to rotate around axis in world coordinates. Quoting from Wikipedia:

Extrinsic rotations are elemental rotations that occur about the axes of the fixed coordinate system xyz. The XYZ system rotates, while xyz is fixed. Starting with XYZ overlapping xyz, a composition of three extrinsic rotations can be used to reach any target orientation for XYZ. The Euler or Tait Bryan angles (α, β, γ) are the amplitudes of these elemental rotations. For instance, the target orientation can be reached as follows:

The XYZ-system rotates about the z-axis by α. The X-axis is now at angle α with respect to the x-axis.

The XYZ-system rotates again about the x-axis by β. The Z-axis is now at angle β with respect to the z-axis.

The XYZ-system rotates a third time about the z-axis by γ.

Rotation matrices can be used to represent a sequence of extrinsic rotations. For instance,

represents a composition of extrinsic rotations about axes x-y-z, if used to pre-multiply column vectors, while

So what you need is to invert the order of the rotations in relation of what you would do using intrinsic (or local space) rotations. @Syntac asked for a zxy rotation, so we should do a yxz extrinsic rotation to achieve the same result. The code is below:

This code is didactic, not optimal, since You could reuse several D3DXMATRIX matrices.

Not the answer you're looking for? Browse other questions tagged 3d mathematics rotation matrix or ask your own question.

5
Rotating plane to be parallel to given normal via change of basis
2
Negative scale in Matrix 4x4
0
How can I properly rotate a 2D vector in the “flipped” XNA client space?
6
OpenGL ES object rotation around z axis
7
Matrix rotation wrong orientation LibGDX
12
Rotate object around fixed axis
0
How to understand kind of matrix/world from implemented math operations?
42
I'm rotating an object on two axes, so why does it keep twisting around the third axis?