Why can't my A* implementation find a path out of an open room?

I tried to follow this article with the following example, but in my attempts it always ends up with a dead end. 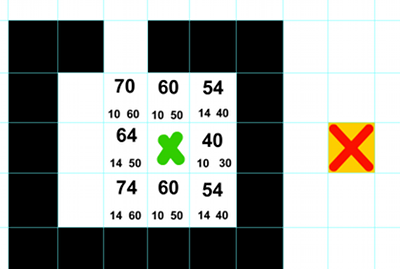 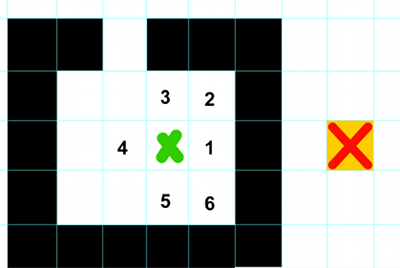 Why does this happen and how can I solve it?

I also looked at the wiki, but I did not understand the system with the colors and the code shown.

Think of A* as having an outer “fringe” of nodes that it wants to consider (also called a “frontier”). This is the OPEN set. At every step it picks one of these and expands it, and moves that node into the CLOSED set. The ever-expanding fringe surrounding the start node will eventually eat up the whole map if you let it.

What you think of as backtracking is A* first expanding the fringe to the right, hitting a wall, and being unable to expand in that direction. But the rest of the fringe is still there. A* will expand other parts of it. It should eventually fill the interior room and go out the door to the north. Once it does that, it'll expand eastwards and then southwards until it reaches your goal. 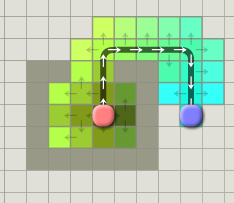 you need to backtrack when you encounter a dead-end

the first line in the while is what differentiates all the algorithms from each other:

the nodes I expect A* to select are

and so on, the fact that you never get to the gap in the wall means that something is wrong in your logic, like not not including some neighbors

OK, so I found a good article that talked about Dijkstra algorithm (it is non-english speaking, so I will try to explain it here ) :

If you try to find the path between two cities, you will have 2 arrays : one with :

Then a second array with :

Then, for each children of the current node, do the same thing :
If we want to go from London to Leeds, and the first child of London is Manchester :

Node : Manchester
have we already taken Manchester to search for its children?
=> No

we check London to YES in the third parameter in the array (the bool of the first array).

And it looks fine for my example, so I guess it should work for others.

67
How does A* pathfinding work?
2
Deleting fewest Navmesh Obstacles when no valid path is found

1
Grid pathfinding with a lot of entities
2
In A star, what is the point of recalculating the best path?
6
In A star, how does the heuristic help determine your path?
3
Special Pathfinding Algorithm
1
Jump Point Search with Weights
5
Find Minion with shortest path
1
Finding dead ends in maze
2
What algorithm should I use to laid out pre-made rooms into a level?
0
Moving camera vertically only after player is too high or too low