I have tutorial text (which I plan to augment with voice-over later, but it must be text for now, because I have not contracted a VO actor yet).

The text presents itself in dialogs, which are like tweets (fewer than 140 characters each). The text is big and readable.

The text contains vital instructions that step the user through what to do next. In playtesting, a user would just press OK OK OK without reading the text. The final dialog would disappear, and the user would be without a clue what to do, because he didn't read the instructions. The game is expecting him to perform the task it just asked, and he doesn't know what it is.

How can I better handle this problem of the user not reading the tutorial text before dismissing the dialog?

Don't have umpteen walls of text of tutorial. If you need more than a single small arrow on screen, you should really consider why.

"Why is the user clicking through dialog after dialog?" Wrong question. "Why are we showing multiple dialogs?" Right question.

You say the dialogs inform the user how to perform the task. The task is too big. The task should be "move here", "click this", "touch that", etc. Not "move here, touch your nose, rub your belly, look due North, hop on one foot, press Up, Up, Down, Down, Left, Right, Left, Right, B, A"

The instructions given need to be broken down into small, discrete parts. Done right, you can keep the instructions on-screen at all times or otherwise highlight the necessary bit. For example, in a game with a controller you could show a picture of the desired button to press on-screen until it's pressed. If you want the player to interact with an item, make it glow, bounce, or otherwise stand-out until interacted with. If you want to tell the player how to interact, pop up the right button/key when they're close enough (many games do this all the time anyway even outside of tutorials, especially ones with context-sensitive controls).

Another theme that you might have noticed to avoid text. Gamers are lazy creatures and they don't want to read instructions. Show, don't tell.

If your testers are just skipping your text, you should do the same - take that as a clue to eliminate it.

Instead, craft your game such that it gives users a progressive learning experience that teaches them what they need to know.

On of my favorite games for this is the Half-Life series. You start out learning just how to walk. Then you need to learn to jump. And then you get a crowbar. They don't throw it in your hands and immediately make you fight with it, but instead you start out just breaking stuff just for fun - or perhaps to eliminate a simple barrier to your progress. Later, you have to use it to survive and fight. But first, you get to play with it.

Players like to play - and explore. Let them do that. Don't force them down a rigid path with no chance to experiment. Let them learn what works by doing, not by you just telling them.

And if what you are asking them to do is so complicated you need to give them a manual, seriously reconsider the approach you're taking with the game.

If the tutorial text is vital, why would you allow the player to dismiss them forever and get themselves lost? Here's a few ideas:

A common approach I've seen is to dismiss the tutorial text only when the player has completed the required action.

For example, if the current text is:

Welcome to bobobobo's game! Press A to jump.

Only dismiss that text if the player has pressed A and jumped.

Another approach is to let the player revisit the text at will. For example, in Binding of Isaac the starting room tells you the controls. You can freely come back to this room in case you need a reminder: 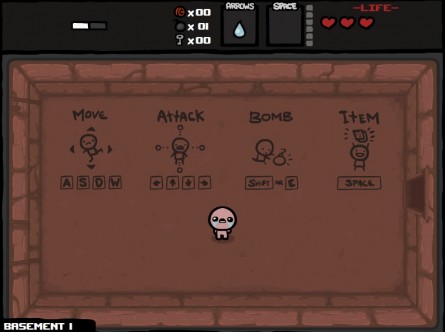 There's another tip here and that's to make the tutorial text as unobtrusive as possible. A text bubble that floats over everything is distracting. If it's in the background, or is something that could be brought up at will (e.g. signs that can be read, or NPCs that can be talked to): 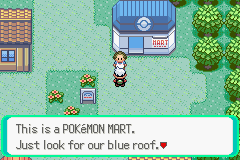 One more approach (and this is the hardest but probably has the best effect) is to make the hints very very subtle. In the developer commentary for Escape from Butcher Bay, the lead developer mentioned small level changes that prevented their testers from getting lost: making certain doorways larger, adding lights etc. These had a psychological effect on the players that made them feel as if that was the right way to proceed, without being told explicitly so.

In the same vein (but in a less subtle way), the opening stage of Half-Life contained color-coded corridors. The player could choose to follow them, or maybe be subconsciously reminded by them: 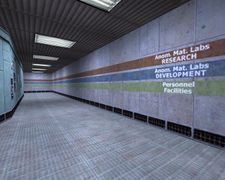 One more thing; I read this somewhere (but I don't remember now) that the first level in Super Mario Bros has an excellent example of preparing the player in advance for obstacles. Consider this section:

See how it's almost the same jumping puzzle repeated twice. First there's almost no consequence for failing to jump over the gap, but the player in failing (or not) will know what to expect and what to do (or not to do) when they get to the real deal: the second obstacle where failure results in death. Sometimes it's better to teach the player by letting them practice in low-stakes settings in this way.

It just occurred to me that type-out text is not just a gimmick used in Final Fantasy, Legend of Zelda, etc. 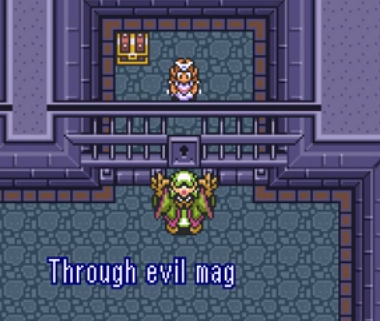 If the text rolls on over a couple of seconds, THEN the user is given the option to press OK, user is more likely to read it!

This is a very good question for the UX (User Experience) StackExchange site, by the way!

Provide a way for the user to hide the dialogs, but with a way to resurrect them when the user discovers he or she is stuck.

When the user selects this checkbox and dismisses the dialog, you can somehow notify the user.

For instance, let's say your game has some status bar at the bottom. A "balloon" could pop up there saying, "Okay, I'll be out of your way, but click here if you're stuck!" and then fade away by itself.

Or the dismissed dialog could shrink-animate toward that location, and then a balloon briefly appears, "Okay, but I haven't gone away; I'm down here if you need me".

Anything of that sort.

I would say, give the user an option to access a tutorials screen which contains the entries presented so far, or if the user is in the same area for long, display the tutorial again...

Assuming all the other answers don't apply, (and you really, REALY need to have text instruction) present that text at precisely the moment when the user needs it. That makes it relevant, whereas presenting it ahead of time makes it annoying.

Wait for the player to be exactly in the right location; they are at the point where they need to take the action to proceed. Wait for them to literally bump into the locked door before telling them how to open it. If possible, detect that they're fumbling around stupidly, so as to give them a chance to divine the correct procedure with no message. If the player seems to be waiting for something, the instruction may be a welcome sight.

And ALWAYS make the text skipable. Allow the player to skip it almost by accident, such as with any click or the button closest to their thumb. If the tutorial milestone, trigger, event, etc. (the proof that the player has gotten the message) does not occur, then you can replay the message. Don't interrupt.

You might be able to make it an optional thing that they can activate if they need it, or ignore if they don't.

Perhaps better put would be, instead of a dialog with instructions, give an option to open up that dialog. I wouldn't suggest adding sound effects to it, those get annoying. And it might be a tricky thing to balance visually. But, personally, I REALLY don't like those "help" dialogs, especially when replaying the game, they easily become annoying.

Not the answer you're looking for? Browse other questions tagged tutorials .

1
When do you give in-game advice?
15
What makes in-game tutorials effective?

2
Architechture problem of implementation of a tutorial for a game
6
Force new players to play tutorial?