How would one construct a realistic "infrared vision" effect?

How would you go about constructing a realistic infrared vision effect with shaders? By realistic I mean one that looks realistic, like this example.

I have an idea about making a texture to determine how much heat a material emits and then determine by using the dot product of normal and view vector how much of that heat reaches the viewer but I'm not even sure that this is how thermal vision even works so I wanted to check if there's a better approach before starting to implement something that might be entirely wrong.

Philipp's answer is correct for "near-infrared" light (about 700 to 1,400 nm), which is basically just like normal visible light, except that it's invisible to the unaided human eye. To model near-IR vision, you'd just replace your object textures and light source colors with alternative ones that model their reflectances and light intensities at different wavelengths than usual

However, based on the wording of your question and the video you linked to, you seem to be more interested in the "thermal infrared" range (8,000 to 15,000 nm), which corresponds to the peak of the thermal radiation spectrum of most everyday objects, including the human body. This radiation still behaves in most ways like "light" and can be modeled using standard computer graphics techniques (as opposed to radio waves, where the wavelengths get long enough that standard assumptions of ray optics start to break down), but the world as seen in thermal infrared does have its peculiarities:

Thus, compared to normal light vision, modeling realistic thermal infrared vision would require more emphasis on global illumination and on dynamically changing emissivity values. Depending on your setting, you might be able to cheat a bit here: for example, for static scenes, the global radiative thermal transfer functions can be precomputed once and baked into a static lightmap, just like you'd do to fake global illumination in the visible spectrum.

If you want to simulate the view through a thermographic camera in your game, I'd recommend at least the following:

What you normally see from the world is the visual part of light which is reflected by objects. A green object reflects only green light, a red object only red light and a blue object only blue light. Infra-red can be considered a fourth color which your eyes can not perceive. An infra-red camera makes infra-red light visible to you by perceiving it with a sensor and converting the infra-red image into wavelengths you can see.

Just like some materials are more or less bright in red, green or blue, they are also differently bright in IR. The IR brightness can but doesn't necessarily has to correspond to how bright it is in visible light. 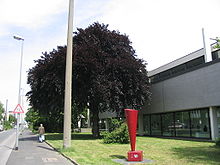 Here is a scene in visible and in IR. Note how the leafs of the trees are much brighter in IR than the trunks, but the IR brightness of the different parts of the facade of the building is similar in visible and IR light.

You might also consider to use different light-sources in IR mode. The sun produces as much IR light as visible light. But artificial light-sources (like halogene lamps or light-emitting diodes) produce few or almost no IR light, so they don't illuminate anything in infra-red. On the other hand there are light-sources which are much stronger in IR (like open fire) or only visible in IR (hot objects which aren't hot enough to glow red. Or artificial IR light sources. Did you know that when you wear IR goggles, you can use a TV remote as a flashlight?). Different light-conditions in normal and IR light could be an interesting gameplay element.

Not the answer you're looking for? Browse other questions tagged shaders .

6
How to create a White Hot thermal camera?

0
Does anybody know of any resources to achieve this particular "2.5D" isometric engine effect?
2
Pixel Shader gradient problems
26
How many active shaders at one frame in the game should I typically use? 5 or more like 100?
23
Why is H (blinn) used instead of R (phong) in specular shading?
5
Calculated normals for mesh not working
4
Algorithm for a rain effect (Shaders)
1
Correct way to project a texture with alpha and colors onto surfaces in Unity
2
How can I create a shader which makes an object transparent in bright light and opaque in low light?
1
How do I implement this distortion ripple effect?