I'm curious to know which is better for games: quads or triangles? Wouldn't quads be better for rendering performances and smoothing out tessellation?

Triangles, the reason is triangles' ratesrization algorithm is faster, and also natively supported in hardware. So it would be faster to convert one quad into two triangles and do the rasterization. Actually that is what happens when you draw a quad on modern graphics hardware.

So the question is what makes it faster ?

There are certain characteristics in the triangle that makes working with it simpler and faster: 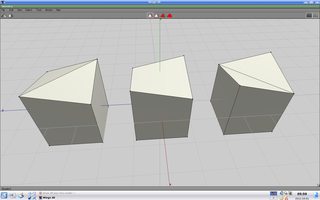 But I am still not convinced, quads ftw! We still need them..

Well, yes! It makes a lot of sense for artists to use quads. (I am not artist myself, but I did study arts- and I suck at it, weird?) Dealing with quads is more intuitive when modeling a 3D shape, providing texture coordinates is also much easier, but this doesn't deny the fact that you only need to deal with quads at the assets creation level, games and 3d engines usually need every bit of performance, so it would some kind of naivety to provide a sub-optimal structure of geometry to the GPU when it's doesn't really have any direct advantage, why use sub-optimal structure when we can take the best of each worlds? Quads at the assets creation level, and triangles at the engine level!

Not the answer you're looking for? Browse other questions tagged optimization 3d-meshes computational-geometry or ask your own question.

6
How can I draw a quad in wireframe with modern OpenGL, without rendering the interior bisecting edge?

2
Best way to traverse triangles in a mesh
2
Easy way to project point onto triangle (or plane)
0
Why are my triangles not being drawn in the color I define?
2
Software rendering 3d triangles in the proper order
1
Drawing many quads XNA
0
Which code is faster to convert -1 to 0 and 1 to 1?
2
Optimising meshes
0
Convert triangles to quads of a Mesh
0
If a 3d surface is occluded by another 3d surface, does this have any effect on the performance and rendering speed?
0
What are perimeter and aspect ratio, in the context of 3D mesh approximate convex decomposition?