My game is not grid-based, so units can be at any arbitrary coordinate and move at different speeds. My obstacles are all rectangular and axis-aligned, so naturally it makes sense for me to overlay a grid over the map for pathfinding. Each unit will take up a grid cell (floor(unit.x / CELL_SIZE), floor(unit.y / CELL_SIZE)). I will then run standard A* grid-based pathfinding on the grid.

The problem is that although the path is grid-aligned, the unit movement is not. Thus, in the midst of moving, the unit might end up colliding with a cell that is blocked, and get stucked. Here's a picture to illustrate: 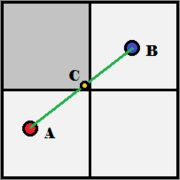 I'm trying to get from point A to point B. B is the center of the grid cell, since it is a waypoint from the found path. A is the point the unit is currently at. The pathfinder thinks A to B is valid movement, since it takes the grid cell of A as the start point and the diagonal neighbour B is not blocked. But moving from A to B might result in position C, which is blocked.

How do I resolve this problem, and what is the standard way to overlay a grid for pathfinding?

A simple solution would be to only allows a diagonal movement in the graph you use for pathfinding if both of the corresponding vertical and horizontal cell are clear.

In your case, since C is not clear, you should no be autorized to go from A to B directly.

Not the answer you're looking for? Browse other questions tagged path-finding grid .