Is it possible to develop games using Google's App Inventor?

Google's App Inventor is a WYSIWYG application development environment for Android. It allows you to control logic of your program using jigsaw type pieces.

A screenshot showing how behaviour can be controlled using the blocks editor: 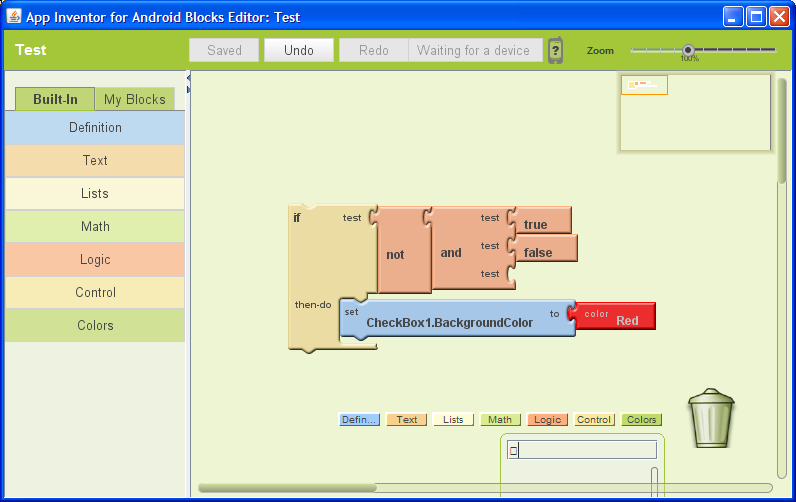 Of course it is possible to develop basic games like the one given in the tutorial. http://appinventor.googlelabs.com/learn/tutorials/molemash/molemash.html

Possible - Sure why not.

Pitfalls - Depending on the blocks provided you may not be able to everything you want. I haven't investigated theirs but other WYSIWYG program builders I have seen put out very poorly performing apps.

Limitations - Limited in what you will be able to create. (I doubt they put a high performance 3d engine in there.) If you aren't capable of building what you want from their pieces then you are out of luck.

As @Vaishakh said, there are games for App Inventor, including Mole Mash (which I wrote). I've also written a game in which you can move a sprite by tilting the phone, having it chase or avoid other sprites.

@stonemetal was right on about the pitfalls and limitations. At least for now, there's no way of extending App Inventor, so if you want to do something not built in to the system, such as 3D graphics, you are totally out of luck. There are also limits on the language, such as the inability to pass a component as a parameter or to have local variables, which provide a practical, if not theoretical, limit on the size of a program. The App Inventor implementation is also not optimized for high-performance games.

I'd recommend App Inventor as a way to help someone new to computing or intimidated by the SDK to get started with creating games. It can also be good for creating mock-ups or prototypes. Some games (such as quizzes) can be implemented just fine in App Inventor, but I'd recommend the Java SDK if you want to build a complex game with lots of objects and high performance. The App Inventor team (which I'm part of) has just released a library to help ease the transition from App Inventor to the Java SDK [http://groups.google.com/group/app-inventor-instructors/browse_thread/thread/10a64e64b7886afb].

It's most definitely possible, and I'd wager that someone has already done it. The biggest question I can think of is how to manage a big project, I guess that is also quite possible, but you might need some adjustment of your usual methods to make it work smoothly.

In any case, I say go for it, the best way to find out what the tool can do is to try it out.

Not the answer you're looking for? Browse other questions tagged android tools or ask your own question.

16
Can I develop games for mobile platforms in C++?
1
Using AdMob with Games that use Open GLES
2
One Android app, dynamic load several Unity games
1
Is this possible to edit the Unity app through inspector while running on Android device?
0
Unity app crashes when using unmodified custom Android manifest (didn't find class “UnityPlayerActivity”)
1
How do mobile games implement time gates unhackably? Is it possible in offline games?