I'm looking for some references about water simulation, and how to model it's interaction with bodies (like boats, ships, submarines).

I've found a lot of references on the visual aspects of water (waves, reflection, etc), but very little about how to deal with the way it should interact with bodies. My experience with game development is very limited, and I'm really stuck here.

Bascally I would like to be able to make the position of a ship variates according to the waves. How can I do this?

I'm using Panda3D, but hope to hear about techniques and implementations used in any available technology.

Basically you're looking at modeling 6 things for a ship: pitch, yaw, roll, heave, sway and surge.

Pitch, yaw and roll are rotations the ship can make as it twists and turns going up and down the slope of the waves. Heave, sway and surge are movements induced by the waves pushing the ship around and/or the ship sliding down the face of a wave.

Imagine a boat on the water like a car driving over hilly ground. If the car drives over rolling hills (like a ship going over waves) it is going to tilt and angle as it goes up and down the hills. This is the pitch, yaw and roll. If the hills (waves) are big, the car (ship) will drive up and down, pitching, yawing and rolling as it goes. If the hills (waves) are really small (smaller than the car/ship), then the car (ship) is just going to drive over them and not pitch, yaw or roll much.

A big ship can just plow through smaller waves, whereas a small ship will move up and down the waves. Taking our car example, imagine someone riding a bicycle (small ship) over a set of small hills (waves). They will roll up and down as they go. Then someone drives a big truck (ship) over them. The truck is bigger than the hills, so doesn't really pitch up and down as it goes over them.

Unlike the car though, a ship is part way into the water, so it's movements are going to be dampened somewhat. Imagine a car with really soft spongey tires. When it drives over tiny hills, the spongey tires just smooth it out. A ship's movements are also dampened, so little waves won't make it bounce up and down like a car on a rocky road. A submarine is sort of the ultimate dampened ship, as when submerged it is pretty much immune to the surface waves. But if it's on the surface it's going to be moved by the waves.

A ship will also slide on waves. A ship going down the face of a wave will surge forward for example. So to extend our car example, make it a car with big spongey wheels driving on a somewhat slippery surface. Unless the car is running the engine to compensate for the slip, it's going to slide down the side of a hill. Even if it is running the engine, there is going to be some slip.

The one place where the car and hill analogy has problems is the fact that the waves change shape over time. A stationary ship will bob up and down as the waves go up and down.

However if the waves are NOT symetrical (like the picture below), then the waves are going to move the ship. Because one side of the wave is steep, the ship is going to slide quickly down that face as well as be pushed by the face of the wave. The gentle back slope of the wave however won't have much motion. 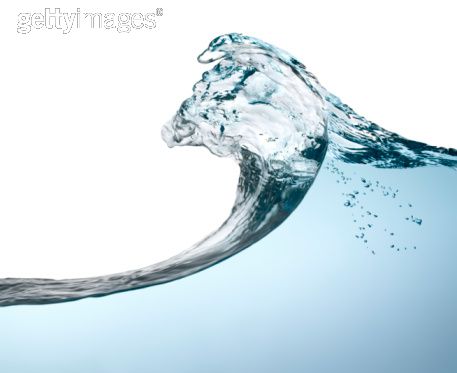 This isn't the most perfect model of wave motion and shape affecting a ship's motion, but it will probably do for a rough simulation.

Buoyancy is how well your ship floats. Very buoyant ships float up high in the water, and ones that aren't buoyant sink. Neutrally buoyant ships (submarines) can basically "hover" at any point underwater, neither sinking nor rising. If you want to simulate a ship sinking, make it become negatively buoyant and it will begin to sink.

Buoyancy also affects dampening of the ship's motion. A ship that is extremely buoyant will bob around on the water surface and be strongly affected by waves. A ship that is less buoyant will be partially submerged and not be affected as much. Think of the difference between a pingpong ball floating on the surface versus an apple, which floats but is partially underwater. The pingpong ball bobs up and down with every wave motion. The apple on the other hand doesn't respond to every wave detail.

If the pitch, yaw and/or roll exceed some value, your ship is going to tip over. When it tips over, it might fill with water, reducing the buoyancy, thus making it not float any more.

A ship that is traveling parallel to the direction of wave motion is "in the trough", and will produce the most nauseating effects at least in my experience :) If you are traveling in the direction the waves are going, you can have a very smooth ride - like having the wind at your back. If you are traveling in the opposite direction as the waves, you will have a pretty harsh ride as you are hitting each wave "hill" as it comes at you. Makes for a pretty exciting ride though!

Here are three articles that cover the science behind this, which might give you some insights. Though heavy on the math and science, they could give you an idea of what the different factors are.

Article 1: Modeling of Ship Roll Dynamics and Its Coupling with Heave and Pitch 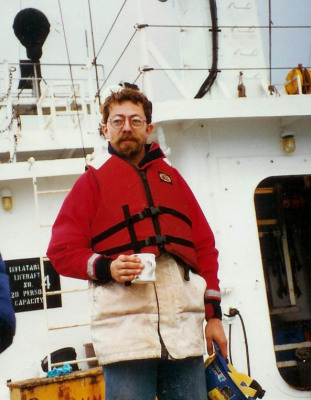 Do you have a water simulation?

From the wave equation sim you can get the direction (dx,dz) of the wave is traveling in

You could add this to the boats position to make it travel with the wave... I've tried, but the movement becomes jerky, so I smoothed it out with a simple 3x3 box filter (smoothing the differences/velocities dx dz)

Not the answer you're looking for? Browse other questions tagged physics .