Maybe a better way to ask is how can I make the camera location my first quaternion spot? 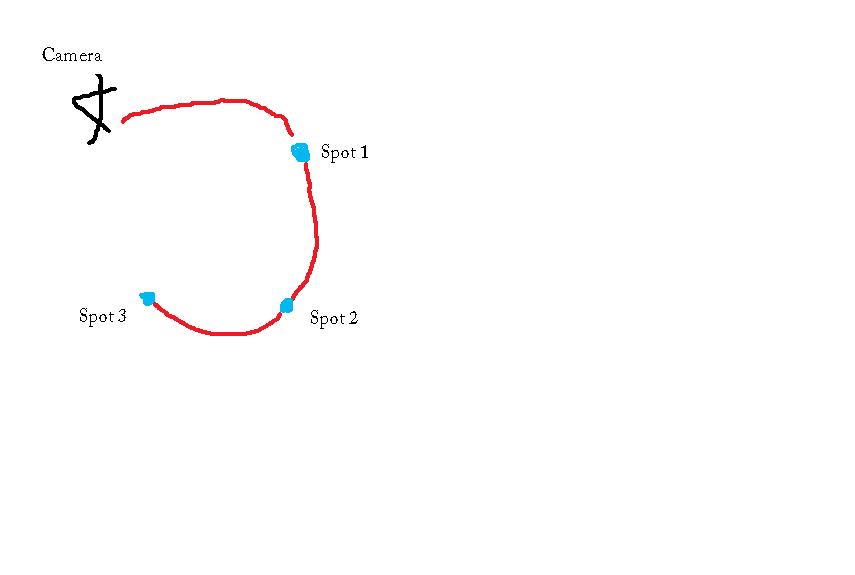 Usually, you define two routes for a camera flight. The first defines the position of the camera and the second defines the point the camera looks at. Both curves may be smoothed using Beziers or B-Splines.

I don't quite understand the part of your question about the quaternion. Quaternions are representations of rotation, like angles but unambiguous. You would find the rotation from orienting the camera to the current point on the lookat curve.

Another option would be to stay with one curve for the position and always looking forward. Then you would get the rotation from the derivative of the curve, strictly mathematically speaking. Practically, you would approximate this by choosing a point on the curve little ahead and one little behind the current position.

For example, see this animated image from Wikipedia, which illustrates the slope what is very similar to your lookat direction.

Bezier curves are quite common and I'm sure you'll be able to find code for it with some light googling.

A quaternion is the rotation of your camera, the position is what you want to move.

Not the answer you're looking for? Browse other questions tagged opengl mathematics or ask your own question.

1
GLM: Quaternion SLERP Interpolation
2
Relating a point after an image is panned and zoomed
4
OpenGL light appears to move with camera and changes with object rotation
0
What's wrong with this camera implementation?
0
How to orient a layer to connect 2 points AND facing the camera
4
How to find the degree of interpolation?
2
Clamp quaternion relative to plane normal