How to make natural-looking paths with A* on a grid?

I've been reading this: http://theory.stanford.edu/~amitp/GameProgramming/Heuristics.html

But there are some things I don't understand, for example the article says to use something like this for pathfinding with diagonal movement:

I don't know how do set D to get a natural looking path like in the article, I set D to the lowest cost between adjacent squares like it said, and I don't know what they meant by the stuff about the heuristic should be 4*D, that does not seem to change any thing.

This is my heuristic function and move function: 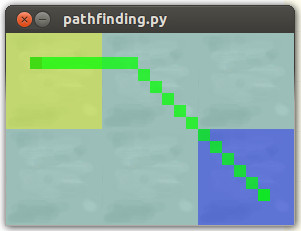 The smooth sailing path we want to happen:

The rest of my code: http://pastebin.com/TL2cEkeX

This is the best solution I have found so far:

It produces the desired path from the second pic, but does not handle obstacles very well (tends to crawl on walls) and fails to produce optimal paths sometimes on longer distances.

What are some tweaks and optimizations I can apply to improve it?

I think what you're wanting is either:

The A* algorithm allows you to assign different costs to path edges. You can also assign costs depending on circumstances. This is your main tool to shape A* paths into looking the way you want them to look.

When you want to discourage long diagonals, you can penalize them. Add a tiny bit of cost for each time the path goes into the same direction. When you do this, the algorithm will automatically try to distribute diagonal steps as evenly as possible over the whole path. Just make sure this additional cost is never more the the cost of taking an additional edge, or the algorithm will start to make completely unnecessary detours just to avoid straight lines.

A good formula could be:

Note that this requires that the path-cost is tracked as floating-point values, not as integers.

As Philipp said, you should add costs when the direction doesn't change for long time. But, the function by Philipp may quickly lead to summing up additional costs, that are higher than the cost for traversing an additional tile. But his key idea is correct!

It seems easy to adapt A* to calculate "all" optimal paths (with shortest length) and then selecting one of them by another heuristic. But there is a problem. If you have a long path, there might be a lot of solutions with optimal length. This causes the A* algorithm to take much longer to compute all these other solutions, too. This is because the grid. You can not walk 80 degrees instead of 90 degrees, which leads to multiple suboptimal solutions instead of one optimal solution. For imagination, imagine a map without obstacles. The x-distance is 2 the y-distance is 3. This means, all shortest paths have 2 diagonal moves and 1 straight move. There are 3 valid combinations: S-D-D, D-S-D, D-D-S (where D=diagonal, S=straight) for this simple path. The real "fun" starts already when you have paths with e.g. 3 straight and 2 diagonal moves: S-S-S-D-D, S-S-D-S-D, S-S-D-D-S, S-D-S-S-D, S-D-S-D-S, S-D-D-S-S, D-S-S-S-D, D-S-S-D-S, D-S-D-S-S, D-D-S-S-S (10 variations of the shortest path, if I didn't miss any). I think you should have got the idea...

So we should fix this by adapting the cost function in a way that fewer solutions (or even only one solution) are "optimal".

Doing the adaptation as Philipp suggests in his example formula will give you much better results, but has still some problems. It will not evenly distribute the shorter/longer "parts" along the path, meaning: the direction changes will be more often at the beginning of the path or vice-versa.

Additionally, a path with endlessly having the actor to "turn" seems to be suboptimal when observed by a human. As it takes time (to show the turn animation) and therefore it must be slower.

Not the answer you're looking for? Browse other questions tagged path-finding python .

4
How can I make my units follow predetermined paths?
3
How can I find all shortest paths using A*?
6
In A star, how does the heuristic help determine your path?
3
How to choose and scale heuristics for A-star on a graph?
11
How do I calculate paths for objects with limited acceleration?
2
Grid Pathfinding with known points
2
Given a grid system where some coordinates are marked as impassable, how to find natural-looking car driving path between two locations?
1
A* heuristic for use with Goal Oriented Action Planner
1
A* heuristic for a map that can have roads