I rotate my game character to watch at the target using the following code:

startQuaternion is the character's current rotation when a new target is given.

lookQuaternion is the direction the character should look at and it's set like this:

turningNormalizer is just Time.deltaTime incremented and turningSpeed is a static value given in the editor.

The problem is that while the character turns as it should most of the time, it has problems when it has to do close to 180 degrees. Then it at times jitters and mirrors the rotation: 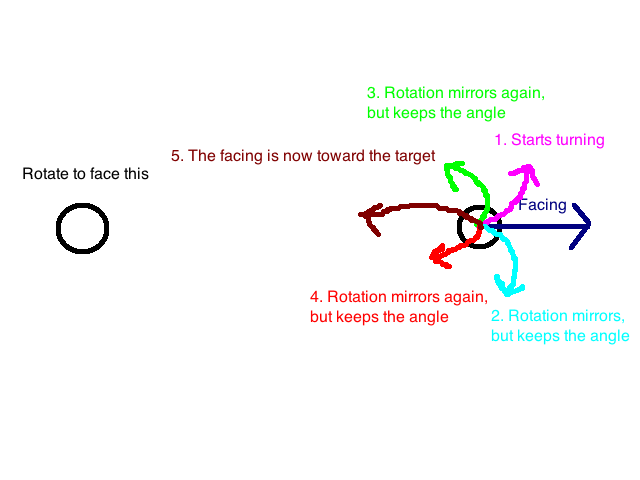 In this poorly drawn image the character(on the right) starts to turn towards the circle on the left. Instead of just turning either through left or right it starts this "mirror dance":

It does this "mirroring" so long until it looks at the target. Is this a thing with quaternions, slerping/lerping or something else?

EDIT1: Apparently the issue does not arise from the rotating itself. The more likely issue is that the character moves toward the facing while it rotates. As limiting the angle, between facing and target, when the character is allowed to move reduces and at times eliminates the jittering/mirroring rotation.

This of course raises more questions, why cannot the character move and rotate at the same time without issues? Code used for the movement:

Both represent the same orientation in 3D space, their dot product is exactly -1, each of them lying in the other hemisphere, exactly on the opposite sides of the hypersphere.

The result you observe when the slerp takes the longer arc to rotate, is when slerping between 2 quaternions that do not lie in the same hemisphere. If that happens, just negate one of them before slerping them, then the slerp will take the shorter arc.

Well your problem is because those two vectors that form your quaternions make 180 degrees, so the question that should be asked when interpolating which arc is it supposed to take? the upper arc or the lower one ??

This is what basically causing the mirroring, each time you are interpolating it's taking the other way around while still maintaining the angle.

According to this link.

When theta is 180 degrees the result is undefined because there is no shortest direction to rotate, I don't think this situation is handled correctly yet, it would be better if we choose some arbitrary axis that is normal to qa or qb, I would appreciate any ideas for the best way to do this.

The issue I suspect you're seeing has nothing to do with your code, but rather is a fundamental issue with interpolation along the surface of a sphere (in this case, for the viewDirection). Between (almost) any two points on a sphere there's a single great circle - for instance, arbitrarily fixing our 'start' point at the north pole, the great circle would be the meridian that the end point lies on. Interpolation from one point to the other moves along this great circle.

Now, for most points on a sphere, nearby points correspond to nearby great circles; for instance, the meridians that Los Angeles and Phoenix lie on are fairly close to each other. But when the destination point is the antipode of the original point — the south pole to the start point's north pole — there's no longer a single great circle through them both, but instead all the great circles through one go through the other. What's worse, this means that points near the south pole aren't 'most points'; two points near each other and both near the south pole can have wildly divergent meridians.

I suspect that what you're seeing is a manifestation of this instability in the meridian - or in other words, the interpolation arc. When the look target is directly behind the character, then things like the first-order inaccuracy in your 'Euler integration' of the character's position, and the way that changes the look direction frame-to-frame, are going to lead to these wildly different interpolation arcs from one frame to the next, and this will likely lead to the 'stagger' that you're seeing.

As far as what to do with it, the best thing that springs to mind is to not recompute the 'target' look direction every frame; instead, use the same one for a span of several frames, then compute a new one and use that for several frames, etc. If need be, you can even interpolate from one target to the next over the span of a few frames so that the direction of motion doesn't change too abruptly.

Not the answer you're looking for? Browse other questions tagged c# unity mathematics rotation quaternion or ask your own question.

28
Orienting a model to face a target
2
How to make something rotate a certain amount over an exact amount of time
5
Matrix represents same rotation with different euler angles
3
Unity - Check if object is facing Vector3 coordinates
1
Rotation around arbitrary vector (using quaternions?)
0
Restrict Up/Down rotation, detect angle upwards/ downwards
1
Rotate player to a specific angle using Rigidbody2D
2
Why do I need to offset my aim rotation angle by 90 degrees?
1
How to completely stop the camera from clipping into the ground