The physics equation for a perpetual seesaw

I am trying to create a game that involves two or more people jumping on a seesaw and propelling each other in the air. I need help with the physics equations

Assume no friction and no air resistance for now. Ideally when you hit the sweet spot of the seesaw at the very end person B should go a little bit higher than person A who just came down. Also, if you hit close to the pivot, then the reverse should happen (I don't know if that is really physics but that is what I am going for).

I know the classic example of two forces on each side and t = r x F so if you had a mass heavier on one side that heavier mass would have to be closer to the pivot.

What I am not grasping is if F=ma, and assuming that the masses are all equal then F=a. Now gravity is 9.8/m/s/s on both objects. Is this true even if one of them is at rest on the ground so the seesaw is tilted up? 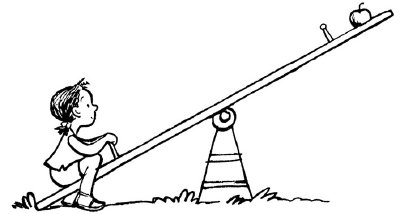 So because force is not related to velocity the following doesn't make sense:

I would have thought dropping an object from 10 meters would have created more F then from 5 meters if they hit the same spot and have the same mass. So while the velocity increases the acceleration is constant isn't the force constant?

What am I not grasping?

It doesn't sound like your use of the word "force" is precise here. If you drop an object from 10 meters instead of 5 meters, the acceleration (and therefore the total force) will have to be higher if it stops in the same amount of time in both cases, so that's true. In the sitting case, the total force is zero, even though the force of gravity is present, nothing a. In the physical sense the mentions of "energy" here are misleading. You don't really have much conservation of energy here, because the collisions with the see-saw are inelastic and do not conserve energy. You don't have much F=ma here, because if you used some force like that you'd still have to deal with angular things. You don't even have conservation of linear momentum: the fact that the see-saw is attached to the essentially infinite mass earth ruins that, and it means that momentum is not conserved during collisions with the seesaw.

So: No energy, force (save for m*g), or linear momentum needed. Instead: Torque and angular momentum.

We need a few variables:

So, what's the problem we want to solve. There are two things we want to do: Solve for the dynamics of the system when no one is sitting down on or jumping off the seesaw, and the instantaneous collisions, which happen when someone sits down or jumps off. The first one we can figure out using arguments about torque, and for the second we can use angular momentum.

So, there. I always like to start from a physically-motivated model, and the terms are understandable "torque" and "angular momentum" equations, so they can be modified if you don't like the behavior! Like, if you want a different formula for pushing down when someone jumps off, you could fiddle around with that x[0]*m[0]*v*sin(a) term and multiply it by some fun function, or you could apply a torque for a period of time, etc.

I wrote an uncommented application to show that the equations are valid, but there are a few issues: the velocities of the balls leaving the platform might not be right, due to factors introduced when changing between screen coordinates and x[i] coordinates. https://www.khanacademy.org/cs/see-saw/2232261551

This is the key statement. You don't want real physics. You want fun, pretend physics. Your focus should be on something that feels good and looks right-ish, irrespective of how physical it actually is.

The real problem here is that you're using static intuition for a dynamic environment. You'll have a much easier time thinking in terms of energy. Imagine that the landeing person transfers all of his Kinetic energy to the standing person. Then you can scale the transferred energy based on how far he is away from the pivot. The closer to the pivot, the more energy the pivot will absorb. Farther out limits the maximum velocity that the faller can impart.

Here is a method of getting something like what you're asking for, or what it sounds like you have in mind. Imagine applying a scalar down the seesaw based on how far it is from the pivot. From the Pivot:

Apply the same to the opposite side. When someone lands, take the product of the scalar tied to where he landed with the scalar for where the other guy is standing. Then transfer that much energy to him.

Start with something like this, then start tweaking it. Game physics is considerably less about getting it right, and considerably more about making it feel right.

I can elaborate on the actual physics if that's still what you want.

Ideally when you hit the sweet spot of the seesaw at the very end person B should go a little bit higher than person A who just came down.

However, seesaws are not ideal and take some amount of energy, so realistically the height will be lower and lower with each launch until all energy is lost.

This is for a game though, which means that you don't have to follow the laws of physics exactly. If you want this kind of positive feedback loop for height, then give the player control to move the character downwards faster than gravity (by holding S or something), or just add/multiply to the initial launch velocities.

In adittion to the answers, the reason why the movement changes depending on the distance from the pivot is because the contact with the seesaw also generates torque = r x F, where r is the aforementioned displacement and F is the applied force.

Not the answer you're looking for? Browse other questions tagged mathematics physics xna-4.0 .

8
How do engines avoid "Phase Lock" (multiple objects in same location) in a Physics Engine?
4
Friction due to gravity in an impulse based physics engine
8
RK4, Derivatives, Understanding Game Physics
2
Understanding constant acceleration in terms of game physics simulation
2
Use constant force to hold something in position
2
Keep gravity velocity the same all the time
3
Why does my Character Jump only Half as High?
0
Calculating displacement in physics simulation
0
Calculating new Velocities of split Physics Body