I have only one object in the scene and it is lit with a directional light. It uses the mobile/diffuse shader. The issue is that on iPhone 4 the FPS drops from ~42FPS to ~11FPS when the directional light is enabled. Rendering is set to forward rendering and there are no other light sources. Shadows are not enabled.

Scene stats give a total of five draw calls, 3k tris and 2.6k verts. Having a single directional light should not have that kind of effect on FPS. What could cause this FPS drop?

So after spending hours to figure out why it did that, it turned out to be rather simple. Even though the rendering was set to Forward in the player settings it was overridden to Deferred in the camera itself. 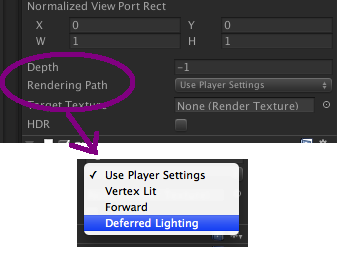 This caused more draw calls than it should have, as @Heisenbug pointed out, and the very poor performance as the iPhone4 is nowhere near capable to use deferred.

Not the answer you're looking for? Browse other questions tagged unity shaders performance lighting or ask your own question.

4
OpenGL lighting with dynamic geometry
3
Unity - Part of the sprite is covered in shadow
2
Unity 2d diffuse sprites not rendering on mobile
2
Lighting large scene with dynamic lights - Unity3D
1
How can I make alternate fragments drop (or make them black) based on a checkerboard texture?
1
Unity - Understanding the SRP batcher