I've written a collision system which detects/resolves collisions between a rectangular player and a convex polygon world using the Separating Axis Theorem. This scheme works fine when the player is colliding with a single polygon, but when I try to create a level made up of combinations of these shapes, the player gets "stuck" between shapes when trying to move from one polygon to the other. 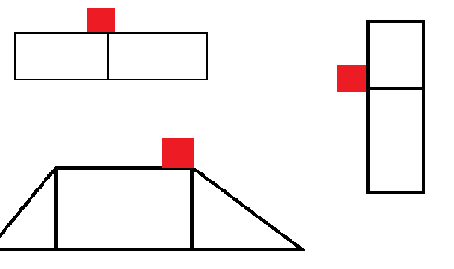 Other similar posts have resolved this problem by having a strict rule on which axes to resolve first. For example, always resolve the collision on the y axis, then if the object is still colliding with things, resolve on the x axis. This solution only works in the case of a completely axis oriented box world, and doesn't solve the problem if the player is stuck moving along a series of angled shapes or sliding down a wall.

Does any one have any ideas of how I could alter my collision system to prevent these situations from happening?

Your problem is the same as in Box2D. (https://www.iforce2d.net/b2dtut/ghost-vertices)

A solution is all the shape, character and floor, should be a bit enlarged and beveled i.e. make corner smooth.

If you have already found a better solution, please share.

Change your red square collision box to a circle collision (or a sphere in 3D, the same issue can happen in 3D).

Not the answer you're looking for? Browse other questions tagged collision-detection movement collision-resolution separating-axis-theorem .

15
Collision resolution in case of collision with multiple objects