Need ideas for an algorithm to draw irregular blotchy shapes

I'm looking to draw irregular shapes on an x,y grid, and I'd like to come up with a simple, fast method if possible. My only idea so far is to draw a bunch of circles of random sizes very near each other, but at a random distance apart from a more or less central coordinate, then fill in any blank spaces. I realize this is a clunky, inelegant method, hopefully it will give you a rough idea of the kinds of rounded, random blotchy shapesI'm shooting for. Please suggest methods to accomplish this, I'm not so much interested in code. I can noodle that part out myself. Thanks!

You might want to choose some points, choose a vector at each point and draw a spline through them. See this wikipedia page for a simple description of a cubic spline (aka Irwin-Hall spline). It's been a while since I used them, but if I remember correctly, this was the one that I found to be the easiest to understand and use. If you know the pen tool from photoshop, this works very similar (I'm convinced photoshop uses splines too, but I'm not sure if it is a cubic spline).

If you're interested, there are many more splines: for example, Bezier splines and B-splines are interesting.

Another thing that comes to mind are level sets, although that would probably require a little more research from your side (to find functions that satisfy your requirements).

Level sets are inequalities in the form
f(x, y) = c
where f is some function and c is some constant.
This is a very general description. You might want to fill out some shape, and draw all pixels where
f(x, y) <= c
with some color. For example, for a perfectly round 2d shape, you have the well-known equation:
x^2 + y^2 <= r^2
You can scale the x and y components to get an ellipsoid With a little experimentation and research, it will be possible to find some funkier shapes (I suppose).

Edit: a little experimentation on wolframalpha.com gave me this. (created with the command 'plot abs((x+sin(x)*y/3)^3)+y^2<=7'). I have no idea if this is anything like what you want, but it's just to give you an idea.

Another straightforward approach is by using your own low-frequency noise to draw (or define) a figure in polar coordinates.

Suppose you want a blob centered at the origin, of average radius 1; this can easily be scaled and translated to other positions and sizes. Imagine with the simple equation r=1 — this would define a circle of radius one at the origin. To add a little variation to it, you can change the radius sinusoidally - add a term of the form w1*sin(θ+θ1), where w1 and θ1 are constants I'll get back to in a bit. One sin term won't make a whole lot of difference, but having several different sines of different frequencies will start to add exactly the sort of 'soft' variation I suspect you're after. The overall form would be along the lines of r=1+w1*sin(θ+θ1)+w2*sin(2θ+θ2)+w3*sin(3θ+θ3)+w4*sin(4θ+θ4)+w5*sin(5θ+θ5) - or more terms if you want, of course.

Here are examples of the three, using a 'total weight' of w=0.25, and using the same set of random values for the wi and θi pulled from random.org: 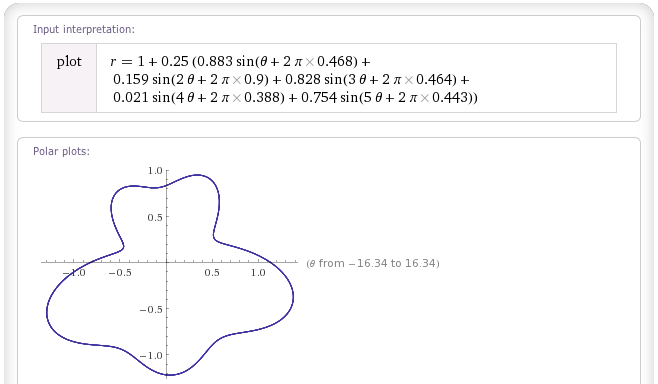 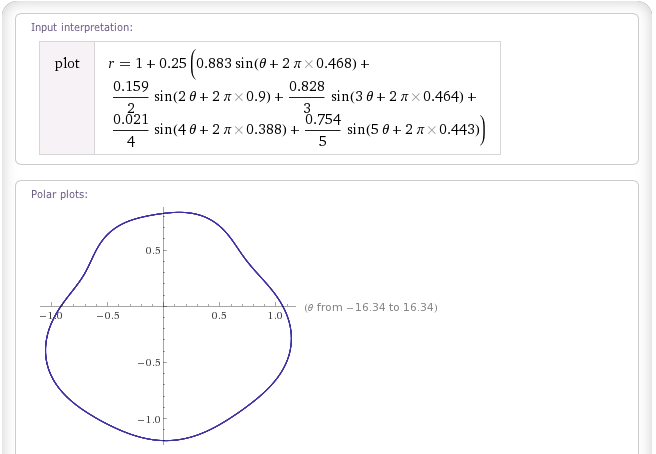 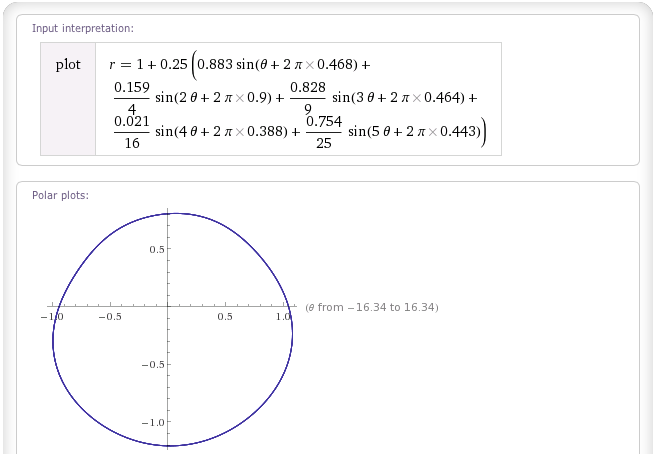 Note that these blobs won't be perfect; in particular, it's impossible for them to curl back on themselves (since for every θ — in other words, for every angle from the origin — there's a single r value), and if you don't choose your weights right they might self-intersect (if r is allowed to go negative). But they do a decent job of being convincingly blobby, and for most games applications users won't notice any issues.

Aside from the other answers, you could use a Perlin noise with a round falloff, if you tweak the settings a little, you could easily create some nice varying shapes.

Not the answer you're looking for? Browse other questions tagged 2d algorithm random procedural or ask your own question.