Drawing transparent and opaque 3D objects. How do I preventing z-fighting?

The transparent object is drawn with the following notable render states (the rest are default XNA values):

The opaque object is drawn using the following states:

In the picture below there is what I believe is a z-fighting issue where the green block and the wooden block meet.

How can I keep the objects in the same location and stop this issue from occurring?

Applying a depth bias to the situation makes no discernible difference either: 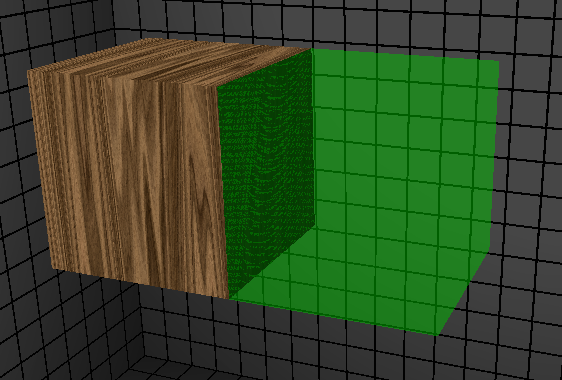 Culling the triangles will cause the object to look incorrect as a transparent object should show both the inside and outside faces.

Use the "less than or equal to" depth compare function instead of a hacky bias, and render transparent polygons last using painters algorithm (as it looks like you are already doing).

I have found a method which works and allows me to keep CullMode.None.

This involves the introduction of a small epsilon value which translates the triangle face along the normal. It is only activated for transparent objects.

The following line is added to the HLSL shader:

Perhaps this is an acceptable approach?

this can be accomplished by a modified RasterizerState, that is set before drawing transparent objects.

As far as I understand this, it adds a little bit to your (projected) z or depth value, before comparing it with the already existing value in the DepthBuffer. So for the graphics card my transparent objects are hovering over the other objects. But as far as you don't make DepthBias to big, this is not visible. Because of the fact the DepthBias is added to your depth value of a certain pixel, its amount has to be carefully adjusted to your near- and far-plane settings.

I can't find the source, but I remember someone suggesting that this z-fight could be caused by the vertex coordinates of the adjacent cubes not matching exactly due to floating point inaccuracy. For example if you render the left cube in left = x * cube_width; right = left + cube_width;, the position of right for cube x can differ from the position of left for cube x + 1. If you instead replace the second calculation with right = (x + 1) * cube_width; (assuming x is integer), the values would exactly match. When you render the exact same polygon twice, the z-fight should disappear.

Not the answer you're looking for? Browse other questions tagged xna 3d-meshes transparency .