I'm having an issue with sprite movement, and I'm not sure how to deal with it.

When I set a destination for my player sprite (by clicking the screen), it sets the player moving in that direction. Unfortunately, the player sort of oscillates. He sort of shivers along the path.

I've set up a test project using just graphics primitives (graphics.fillRect(x,y,w,h)), and it's really easy to see. Here's an example: 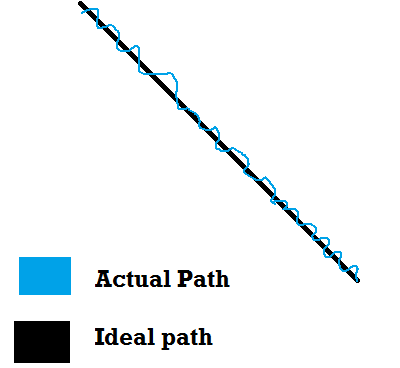 This is a really really basic movement system because I'm having the same issues elsewhere and I wanted to work on them in a more controlled environment.

The weirdest part about this is that when the player arrives, he still just sits on one point, shivering madly.

Well he appears to be "overshooting" the target. Basically the size of your discrete step (velocity) is probably too large.

Try reducing velocity by a lot (by the way, if velocity is a scalar quantity, it should actually be called speed). Try increasing it a bit until he is moving at the correct speed, but not overshooting the destination point.

When the distance to the destination is very close (ie smaller) than your velocity step size, you can either reduce velocity drastically, so he creeps into the final spot, or just set his final position at the destination. That'll prevent overshoot.

I had a similar problem not too long ago. Here is the question (which also holds answer):

It's using the SFML 2.0 framework for C# but it should be translatable.

Not the answer you're looking for? Browse other questions tagged java 2d sprites vector .

12
Questions regarding games architecture with XNA
0
Actor and Sprite, who should own these properties?
0
Bouncing projectile off of sprite, the sides work but top and bottom do not
0
How do I cycle through a BufferedImage array of images and display them?
3
How can I make players move diagonally at equal speeds?
0
Collision detection with isometric tiles stored in rectangular files